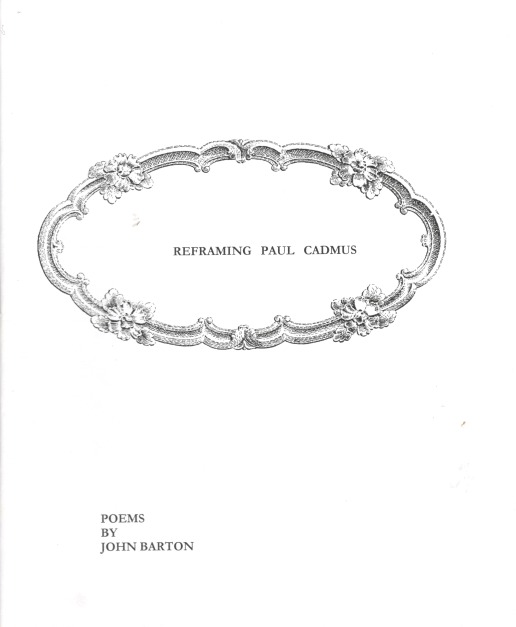 Printed 7” x 8.5”, John Barton presents, here, a sizable—not to mention memorable—collection of ekphrastic poetry. Each of Barton’s eleven poems printed herein demonstrates not only an intense familiarity with the visual work of Paul Cadmus, but a unique ability to transform his paintings into sensual narratives, all of which connect into a near-seamless collection that demands to be read aloud.

For a reader generally unfamiliar with Cadmus’s work, I am surprised to feel such a visceral connection with his subjects through the dancing words of Barton’s interpretive hand. This speaks to the skill of the writer, and his ability not only to re-tell Cadmus’s implied narrative, but to develop it into an entity more than its original author conceived. This is the juice of ekphrastic poetry!

Take, for example, Barton’s textual sketching-over of Cadmus’s 1935 “Gilding the Acrobats”: “Untouchable— | For the duration, a man among many | Adept at plummeting down | To earth | A man up-close | So ordinary— | A man of ordinary looks.” Barton’s words, here, not only describe the events of the painting, but they enact them, the poem becoming acrobatic itself. A similar action marks the conclusion of a description of the 1987 “The House That Jack Built,” which reads as follows: “Kamikaze-like across his large stubborn | Shoulders while, unasphyxiated, he carries | On reading, indolent and immune to fire | Story after news story conflagrating | In flashes abou him, the drifting | Tatters tamped in his damp coiled hair.” The stoic eroticism of so many of Cadmus’s figures comes alive in Barton’s lexicon, perhaps even moreso in the latter than it does in the former. What results is a chapbook which must be consumed. (Joel W. Vaughan)