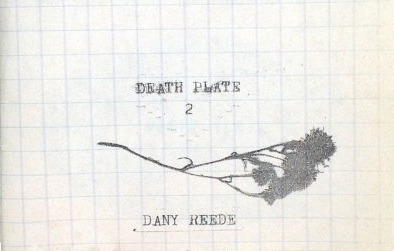 Purportedly a comic zine about a “dream-eating lamp”, Dany Reede’s latest creation takes visual twists and turns through a baffling subconscious. The zine is laid out on miniature yellow, landscape-oriented pages and the story unfolds in one-to-three panels per page without dialogue, but with much cinematographic style. The gaze of each successive panel seems to zoom deeper and deeper into the increasingly microscopic depths of the hungry lamp’s dream smorgasbord, like snapshots from a one-camera descent into an abyss of sleeping visions. This issue of Death Plate is thoughtfully assembled in a numbered edition of 100. The outer cover is graph paper with delicately printed typewriter script and a small plant print. The endpapers are purple tissue, followed by one inner blue page bearing the only text of the zine: “In the late hours of March 17”; presumably the night of the fateful dream consumption. Truth be told, it took me a while to figure out that the dream-eater in question was a lamp. I’m pretty sure now it’s an Ikea lamp – one that looks like a deep sea urchin. Picture one of those circling your midnight psychic murmurings. Yeesh. The “action”, as it were, is a little hard to follow in Dany’s zine; I’m honestly not sure what’s happening throughout most it. But he scores points with concept and method. (Joshua Barton)