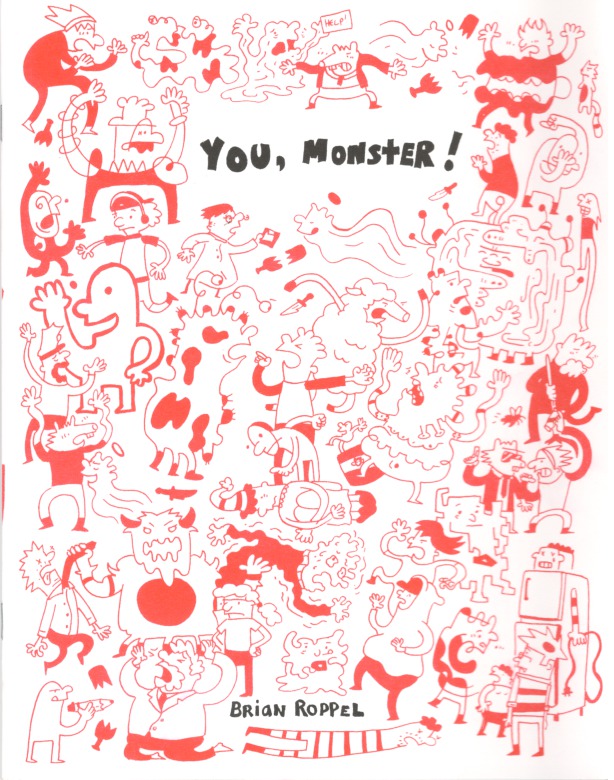 In the comic world, the line between cute and grotesque can sometimes be a mere squiggle. Such is the case with You, Monster!, a new collection of bite-sized comics that is 80% super cute and 20% fuckin’ gross. Brian Roppel is the author and illustrator. He seems really hyper—in a good way. Roppel’s characters and creatures run amok over 20 pages, each strip wrapping up in a page or so. Themes like ego and self-esteem are thrown out there, but done so in a way that’s playful yet thoughtful. It’s smart when it wants to be and consciously not smart at times too (which is also cool). The other great thing about You, Monster! is its attention to detail, with hundreds of characters jammed into these cells. Personally, I enjoyed the rhetorical responses to bad cliches like “You can’t have your cake and eat it too”. Responses are both written and illustrated. Both kick considerable ass. On the whole, this comic seems kinda satirical at times and almost feels a bit like a slightly skewed edition of MAD Magazine but from a planet where there’s nothing to parody. Instead, it seems that You, Monster! may just be jabbing at inner monologues and social conventions and the like. The targets might be more universal which is precisely why this is a fun, compelling read that you’ll likely be compelled to read (more than once.
(Cam Gordon)