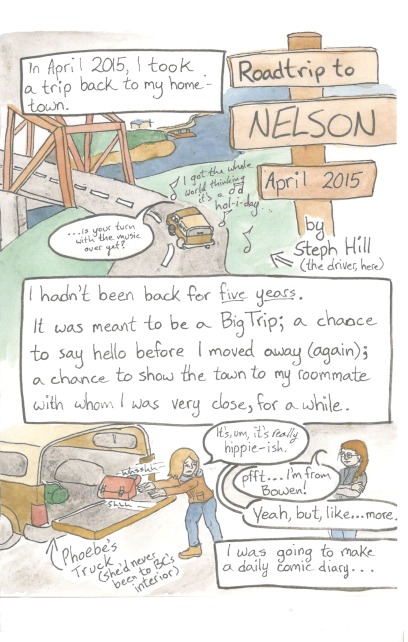 The adult colouring book phenomenon may turn the stomachs of some. That doesn’t mean that zines in the same vicinity can’t tug on heartstrings. Roadtrip to Nelson is a comic-based retelling on the kind of semi-perpetual homecoming that many of us face. This one is centered on Nelson, British Columbia. It’s seven and a half hours from Vancouver and mere minutes from nowhere in particular. Steph Hill is the author and Steph Hill is the focal point as she shows her roommate around her hometown with some pride and whole lotta more matter-of-factness. The colouring book comment: This comic is lovingly hand-drawn with warmth, soft tones and a shitload of heart. It appears that Hill wants to document her efforts to tour guide but also, she wants to document the journey and the emotions, thoughts, realizations that encase the entire effort. It’s really personal and touching. The nature world looms large. The mountains and dense forests of BC play the supporting cast or maybe centre stage. Hill and her roommate journey within and even once they reach town, it doesn’t really mask the fact that they’re surrounded by natural life and not really that much human life. It’s universal in theme but also wholly specific because Nelson is a spot few of us will ever see. That’s why Roadtrip to Nelson works and works well. (Cam Gordon)