Other Cities, Other Shores 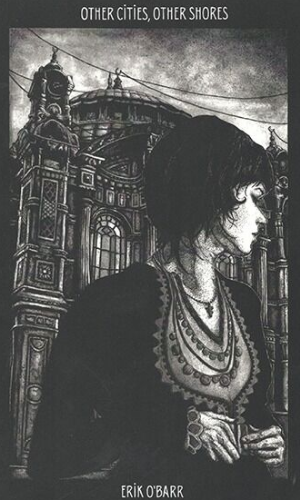 Filled with gothic architecture and plaintive portraits, Other Cities, Other Shores envisions a diegetic world for the words of a dead poet. C.P. Cavafy was a Greek modernist who wrote throughout the late 19th and early 20th centuries before dying of cancer in 1933. And Erik O’Barr’s visual interpretation of Cavafy’s work spans a vast and macabre landscape. Put on some Christian Death to this one. There are 10 of Cavafy’s poems throughout, each paired with an original illustration: women and men caught in some tranquil contemplation — distant gazes, paisley fabrics and smoking cigarettes. It’s pretty predictable, I guess. But the illustrations, like the poems themselves, are intricately detailed sketches of human loneliness and longing. “I never found them again— / all lost so quickly . . . / the poetic eyes, the pale face . . . / in the darkening street . . .” And yet, I find O’Barr’s drawings kind of sabotages the potential imaginative power of this kind of poetry. It’s harder to relate to Cavafy’s work when it’s shrouded in a sense of turn-of- the-century romanticism. The imagining has been done for you, already. But I suppose that depends on whether you view Other Cities, Other Shores as a chapbook or an artzine. As an artzine, O’Barr has crafted a strong vision of O’Barr’s work that’s grounded in an articulate rendering of that respective time period. However, for the contemporary reader or layperson, that vision might err slightly on the side of gothic cliché. (Jeff Low)