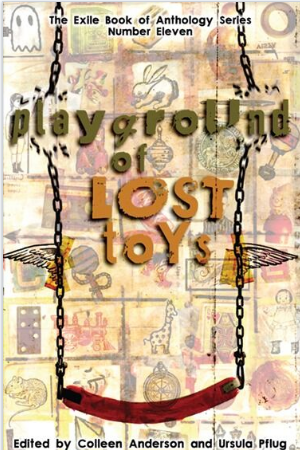 Exile Editions’ Playground of Lost Toys is a collection that explores the many complex emotions associated with childhood play. In each of the 22 stories, toys and games are central elements that have profound effects on the characters, usually through the mystical and paranormal. These objects come to reflect the feelings of loss, wonder, and nostalgia that are often associated with youth.

The writers of Playground do accomplish this in a general sense, but some of the stories lack the nuance of nostalgia and the complicated nature of a rough childhood. Stories like “With One Shoe” rely heavily on the idea of escape, such that the story feels incomplete both literally and emotionally.

But when things work in these stories, they work really well, as seen in “When Trains Run on Time.” This story uses escapism to greater effect by treating it as a sort of double edged sword — when you escape the troubles of life, you also risk losing crucial experiences.

A bulk of the stories in this anthology feature some sort of mystical element, which, though interesting, becomes a bit worn around the half way point. In stories like “The Food of My People” and “What Not to Expect in the Toddler Years”, the often unexplained magics felt maybe too easy. The most interesting, inventive, and emotionally effective of the collection tended to be the pieces that leaned more honestly towards sci-fi and horror. The characters in these stories felt human as they connected their happiest moments to inanimate objects through emotional bonds, rather than some otherworldly intervention.

The stories of Playground can be a little fluffy, and that’s okay. While they may not give the reader any deep moments of reflection or sentiment, they will at least drum up some of the strange wonder that is childhood. (Rayna Livingstone-Lang)