An Unbecoming Fit of Frenzy 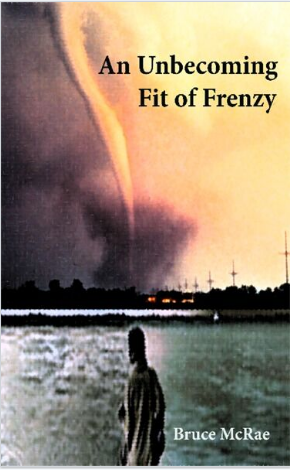 This guide to a dark afterlife reads like the words of a man who’s seen it all, pushing past naïveté and bitterness to show the deep underbelly of religion and what it’s left behind. Surveying an unknowable, god- awful landscape, Bruce McRae’s collection of poems An Unbecoming Fit of Frenzy doesn’t flinch in its search for beauty in the bleakest of futures.

The four parts of this series begins in “a town without beginning or end”, with a pawn shop “Where all that’s unwanted goes”, and a mailman “plucking out the last dead letter.” McRae’s nameless narrator explores a post-apocalyptic wasteland, offering each oddity like “a single sputtering streetlight/ reflecting upon the sources of darkness.” He speaks with an assured jadedness that shows no fear in this arena of exhausted Christianity, delicately describing tired gods, an abandoned Heaven and the Devil’s day off, insisting that humans burden the immortal.

A poem a page makes for a lot of material, but McRae’s words hit fast and hard, plucked carefully to find simple beauty in a book as “a stone to weigh you down in bed”, or a plant’s root as “pure desire/ churning reward from decay.” Considering bugs’ Jurassic roots, or an author being surprised by their own writing, McRae gives pause to the natural and expands into larger ideas of digging for truth amidst life’s numerous inevitabilities.

McRae unfortunately gets a bit too comfortable in his own narration, and eventually spirals down a frustrating path. Some of the poems read like ramblings, jumping from a scene of a diner with “boulders, gently sautéed in temporality” to some clown academy, to a cup of Now (whatever that is). Abstract and fragmented, the last works masquerade as a reward at the end of a long journey, telling you “a thing is, and a thing isn’t,” and “What equals what?/ Nothing.” (Grace Bueler)