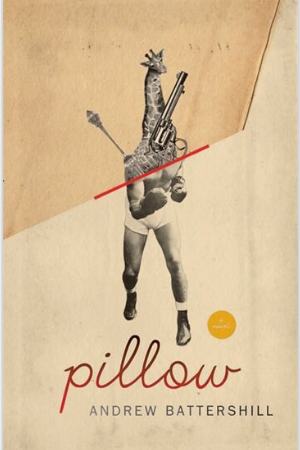 Surrealism meets psychological realism in Andrew Battershill’s debut novel, told from the point of view of a punch-drunk former “champ” wading through a retirement made up of petty-crime and poverty. Pillow, our protagonist, is an animal-loving amateur enforcer for the local crime-syndicate, now caught up in a downward spiral sparked by the botched payoff which opens the text.

Pillow falls among the lesser-read class of novels where the author’s voice takes a front seat to narrative, refusing to render itself invisible in the face of a steadily-moving plotline. Battershill’s style is anything but phoned-in, reading like a cross between Film Noir and early 20th-century Surrealist literature. The novel sets itself further apart from the crowd, however, in the fact that it benefits from its overbearing voice, casting a cheeky Battershill as the main act in a fictional drama which might come across as too ‘hard-boiled’ were it to double down on the plot, or take itself too seriously.

This is not to say, of course, that Pillow is in any way attempting to tell a joke: the cast is equal parts human and hopeless, and Battershill offers little in the way of resolution. It is instead to insinuate that our narrator might be taken with a grain of salt, making habitual use of metaphors with dubious connections :“They were the sort of woods where seeing an alien landing or a backwoods marriage would have just made Pillow nod and shrug.” Pillow himself might be read as Battershill’s mouthpiece, here, when he recommends a prospect “just learn six words they don’t expect you to use. In this business, that passes for a personality.” Duping his reader or not, Battershill uses ‘personality’ to great effect; Pillow is a fantastic read. (Joel W. Vaughan)