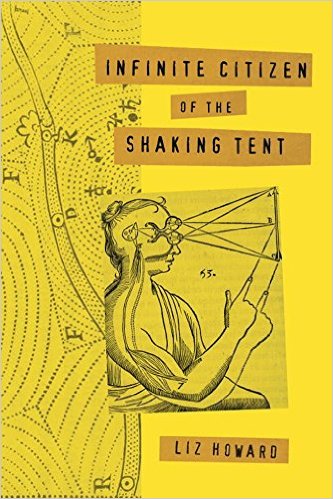 Liz Howard opens an interiority into rural and urban northern landscapes in this powerful debut collection. Infinite Citizen of the Shaking Tent manages the complexity of identity by examining one world through different human traditions of understanding, set up as though in competition and ultimately reconciled by their mutual presentation in the language, or in language as such that is ultimately at odds with what it describes.

Spinning together words and phrases from the Anishinaabemowin language, lines and metrical patterns from colonial literature, and the coolly removed terms of theory and science with lived feelings and experiences, Howard presents as a landscape a mishmash of romances reimagined and corrected. Failure to touch the world, explicitly and representationally linked to the “natural” world, is what characterizes the new world emergent in Shaking Tent: what is said is managed in meditation on the impossibility of saying it and speaker and reader are located virtually just beyond the text, communing in a longing for the recognition of oneself by another.

Read this book because it’s stupid pretty. Infinite Citizen of the Shaking Tent isn’t an easy read, and contains more than a few four-dollar words that might send you running to the dictionary, but each poem turns on a chill haunting beat to satisfy a formal understanding preceding a more concrete one on a second or third reading: “the site was discovered / during construction of a new venous / highway for stars birthing themselves // out of pyroclastic dust and telepathy / in the time zone of some desperate hour / when all our exits are terraformed.” Read it. (Maureen Brouwer)