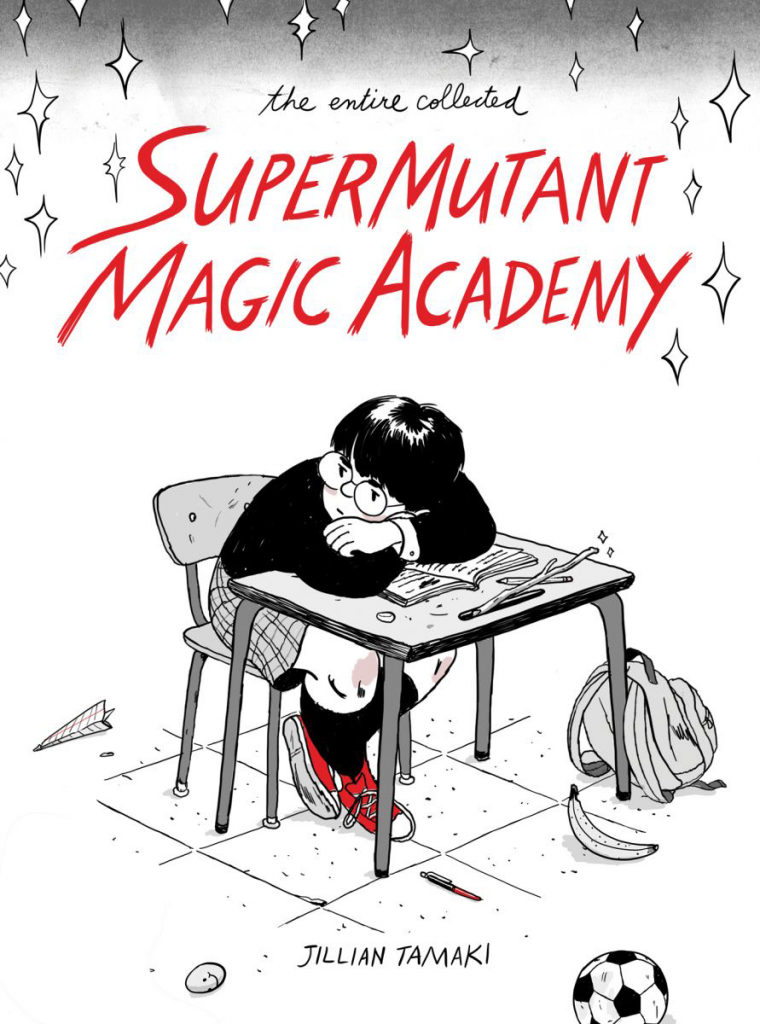 Governor General Literary Award-winner Jillian Tamaki’s SuperMutant Magic Academy is absurd, erudite, introspective, and above all things hilarious. It’s a little like Hogwarts collided with Xavier’s School for Gifted Youngsters, replete with heavy doses of cynicism, shape-shifting, and a cat that may or may not determine the fate of all humanity.

The book collects work serialized on- line for four years and takes place in a prep school for mutants, witches, and a lizard-headed girl who aspires to be a model. At the core of the narrative are: Frances, the resident avant-garde guerrilla artist; Gemma, a meddler and wannabe philosopher; Everlasting Boy, whose scenes deal abstractly with impermanence and the cyclical nature of life; Marsha, a brilliant, closeted girl dismantling social norms at every turn, and Wendy, the cat-eared object of Marsha’s affections.

The shorts, which work on their own and as part of the larger narrative, achieve a careful balance, mixing the surrealism of the academy with grounded, down-to-earth conversations. The characters themselves are gloriously temperate, no matter the craziness surrounding them, which is why it all works so well. Really though, it’s Marsha and Wendy who form the emotional back-bone of the book. When late in the collection Marsha finally comes out to her friend, it is genuinely, painfully effective.

Employing the deadpan wit and deft observational skills previously seen in Skim and This One Summer (both co-created with cousin Mariko), Tamaki uses life at the academy to skewer gender norms, performance art, academic cliques, eroticism, teen angst, and empirically perfect asses. The art, while simple, is well char- acterized and provides Tamaki’s writing with a great deal of depth.

But after all that, when all the strangeness and magic is stripped clear, it’s the moral of the story that wins the day. There is life after high school, and just because you’re not the chosen one doesn’t mean you don’t have a future. (Andrew Wilmot)