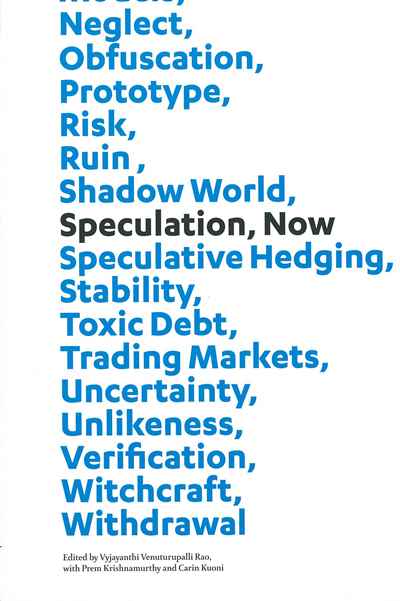 The Vera List Center for Art and Politics, part of the New School in New York, has produced this experimental political almanac on the theme of speculation out of one its recent series of exhibitions and roundtables. It’s an exploratory and transdisciplinary assortment of texts and art, captured and designed to reflect myriad approaches to speculation, a theme chosen in response to Barack Obama’s generic call for “change”.

There are 60 or so contributions. Lize Mogel’s appropriation of distorted satellite images critically examines the irony of high tech map imaging rendered in maxi-pixels, useless to the common user. Satya Pemmaraju’s texts contrasts what speculative action ought to look like (a mind-set of the work-in-progress involving “…anxiety, nervousness, tension, and the relentless not-knowing that accompanies birth.”) with case studies of standard financial market practices. Laura Kurgan’s collaboration on the Exits project is an insightful hybrid of refugee activism, computer art and statistics.

These nuanced works are complimented by sidebars on almost each page, bits of an experimental glossary distributed throughout the book. For instance the word models is entered twice, each by a different author, each providing their own definition and anecdotes. Also among the texts and the artworks are blue-framed postcards with questions arising from roundtable discussions, ordered by participants’ birthdays, an in a sequence that acts as an arbitrary and destabilizing discourse within the project.

At first glance, the reader may feel some uncertainty about approaching such a seemingly complex collection. The intentional conceptual randomness is set against a remixed visual and typographic style (don’t miss the ingenious use of type in the page numbering.) However the editors manage to avoid that slapped-together visual construction which anthologies sometimes suffer from. Rather, the book is an eloquent and intricate political work of art and writing. (Marc Tremblay)