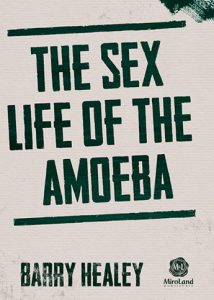 Sarah Fielding is an idealistic young woman with dreams of heading to London. She works as an assistant producer to a strange, opportunistic, oversexed Hungarian film producer named László Kovac. Together with his director Vladimir Pudovkin, László has been responsible for producing such masterpieces as Kiss My Asp, Sorority Playgirls, and Halloween Hoodoo. But Sarah and Vlad want more. They want their Citizen Kane—they want to make art. It’s Sarah who offers László the opportunity to do so by purchasing the rights to a small CanLit title called The Smoke Pickers, by author Honor Lamprey.

But Honor’s novel is a sweet, simple love story that thrives on implication and not direct titillation. And for László, a film without sexy fun times is a wasted opportunity—and box office suicide. What follows is a twisted battle of wills between László’s libidinous nature, Vlad’s artistic ambitions, the integrity of Honor’s work, and Sarah, our protagonist, who must find a way to satisfy all these personalities and several more: Nathan, the Shakespearean actor who loves himself a little too much; Carey, the female lead who helps push Sarah to explore a side of her she’d never considered; and Martin Gage, an extreme Nic Cage-type persona whose grip on reality is tenuous at best.

The Sex Life of the Amoeba is a mostly enjoyable read. Filmmaker-turned-author Barry Healey writes clearly and succinctly, and the narrative moves at a fast clip, requiring minimal to no inside knowledge of the film industry to understand what’s going on. However, the book is not without its problems—chief among them, the end to Sarah’s personal journey, which I found to be hugely unsatisfying and something of a disservice to her experiences.

While evolution, or a lack thereof, appears in some ways to be the novel’s thesis, the conclusions Sarah and Healey come to in the end feel forced and self-limiting in a way that, frankly, made me wish I hadn’t invested so much time into her character. (Andrew Wilmot)