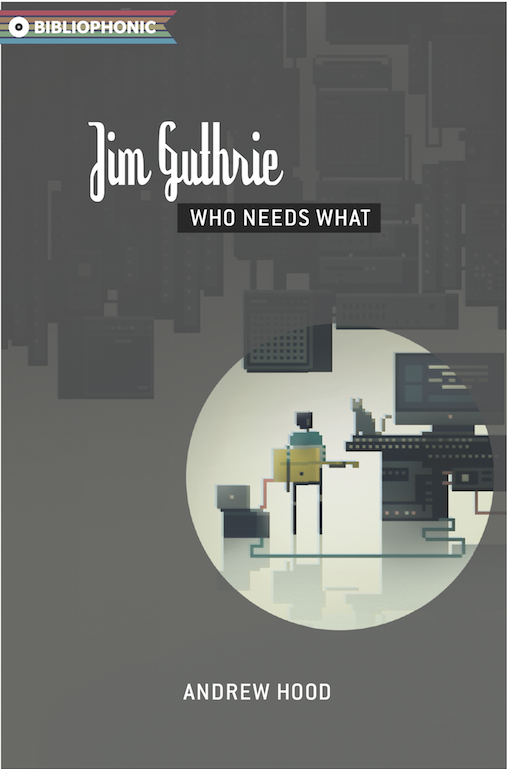 It would be hard-pressed to find someone who lives more wholly with the mantra “Home Is Where The Rock Is” than Jim Guthrie. From humble beginnings to his continuingly modest life, Hood narrates a documentary style-biography of the life and musical journey of Jim Guthrie. In what plays like a trip down memory lane, Hood’s interviews with Guthrie and the people around him paint the backdrop for the man he would become.

Like most biographies, Jim Guthrie: Who Needs What is a very nostalgic text. The interviews are primarily composed of Guthrie and his companions reminiscing on events with a tinge of reverence. For instance, they wistfully recall how, in the early days, he composed a majority of his music from his broom closet like room, with a four-track perched on his knees, using the MTV Music Generator for PlayStation. The book is filled with awe-inspiring stories of the like, showing Guthrie’s skill and determination. It makes for an intriguing tale of perseverance, which entices you to learn more.

But Guthrie himself did not like to be “the centre of attention”. This text perfectly encapsulates this quality. As the opening quote by Guthrie states, “Is there any way you can write me in as a supporting character in my own biography?” Hood masterfully crafts a biography about Guthrie without forcing him to become the sole centrepiece, while still respecting and paying homage to an amazing musician who was at the forefront of Canada’s indie rock renaissance. By doing this, Hood captures the essence of Jim Guthrie. (Brandon Daniel)