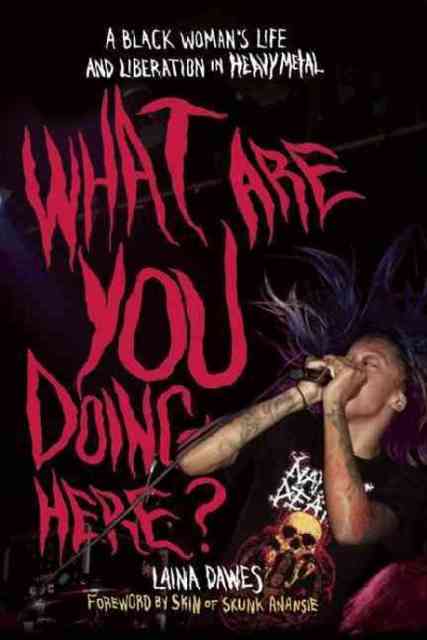 The cover of What Are You Doing Here? A Black Woman’s Life and Liberation in Heavy Metal.

In 1993, Ian Christe was seeing a passion of his fall by the wayside. A longtime metalhead, he arrived in New York from Germany as thrash metal was thriving. “It was a huge part of my upbringing, and what I spent all my life thinking about,
celebrating, and doing dumb things because of,” he tells me, from his office in Brooklyn.

Later, Christe started working as a freelance writer. He noticed that within the world of print, his musical preferences were largely invisible. His efforts to raise metal’s profile in the publishing world led to the founding of his own publishing
imprint Bazillion Points, which celebrated its fifth anniversary this past July.

In his early writing days, Christe began bringing metal themes into as many assignments as he could. “I wrote for the design magazine ID and I remember trying to convince them that the visual style of black metal was worth writing
an article about,” he recalls. But having snippets published in the occasional magazines couldn’t settle him. In 1999 he began writing Sound of the Beast–the first-ever book to comprehensively cover the history of metal.

Five years later, Christe approached Swedish small press publisher Daniel Ekeroth to ask if he could publish his book Swedish Death Metal in the U.S. Although Christe had never published a book before, Ekeroth, having read Sound of
the Beast, agreed to risk the collaboration. Once Swedish Death Metal proved successful, it opened the gates of hell for further projects, and Bazillion Points emerged screaming into the world.

The company keeps its office in a refurbished No. 2 pencil factory in Brooklyn. “A Swedish guy named Magnus works with me,” Christe adds, referring to Magnus Hendricksson, the tireless human PR machine who, along with Christe,
comprises the press’ entire staff.
Another trait that makes Bazillion Points’ books so edifying is that its authors have actively participated in the scenes they’re writing about. Christe has logged time in metal outfits, while Daniel Ekeroth had played in a handful of Swedish metal bands. Hellhammer’s guitarist/vocalist Tom Gabriel Fischer recently released a hardcover history of the band titled Only Death is Real. The imprint has also published an English translation of Hanoi Rocks guitarist Andy McCoy’s
autobiography, and AC/DC bassist Mark Evans’ book Dirty Deeds: My Life Inside/Outside of AC/DC. Bazillion Points is reaching for a perspective even tour stalkers won’t have.

These in-depth perspectives also allow writers to shine a light on alternative experiences  within metal scenes. In October 2012, Bazillion Points released Laina Dawes’ What Are You Doing Here? A Black Woman’s Life and Liberation in Heavy Metal.  This groundbreaking book explores the culture of black female metal fans, incorporating Dawes’ own experiences and featuring interviews with black female metal musicians, writers and fans. Her book is challenges the nature of metal fandom and its so-called inclusivity. And in the style that Bazillion Points commends, the reader
will leave with a broadened sense of perspective.

Recently, Bazillion Points has begun branching out into other areas of music history. The books Touch and GO and We Got Power! are re-prints of old punk fanzines, documents that followed rise of hardcore punk in the United States. And
in June, the imprint released a “grunge microhistory” on an early Nirvana tour written by Sub Pop Records co-founder Bruce Pavitt. To Christe, none of these books deviate too far from his original vision for the press. “Each book is kind
of another node, another planet in the small constellation of Bazillion Points books,” he says. “Now if a Lionel Richie book comes out, then that’s branching out.”

With one major anniversary down, Christe wants to make it another five years, and he’s ready to diversify even further. “The idea was always that (the press) would cover a billion different avenues of interest,” he says. In addition to his metal background, Christe also played in bluegrass bands, and even had a stint as a drum and bass DJ. There’s no telling how far Bazillion Points will go in its reach, and the press has the potential to explore and share many other areas of musical interest. (Colin Brush)