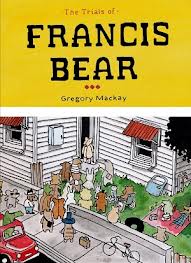 The Trials of Francis Bear is the second volume of the titular bear’s adventures by Australian cartoonist Gregory Mackay. I confess I was initially leery of the book based on the back cover’s description of Francis’ love of the bottle. I expected one of those “cute animals as vulgar drunk” type books. Thankfully, I was completely wrong. The Trials of Francis Bear is more of a freewheeling, ever-bending comedy of errors, that feels as though Mackay is making it up as he goes along.

Trials begins with Francis as one of the world’s worst longshoremen, puking over the side of a boat. The crew finds a WWII ocean mine, which Francis insists they tow ashore so he can keep it, and in the process they get fired. From there he becomes a dealer in discontinued pens, builds a submarine from the mine, discovers a colossus on the ocean floor and eventually starts a war after growing to enormous size in an industrial accident.

It’s a roller coaster ride of a story, but one that doesn’t get too confusing or cheeky for its own good. Mackay’s art is equally crude and sophisticated, with all of the characters depicted as simple animals who are charming but not cutesy.

It’s a mix of classic children’s books, particularly Babar, along with contemporary underground comix styles. The sophistication shows up in Mackay’s sometimes-intricate backgrounds, as well as with cross sections for the vehicular gadgets in the book such as the aforementioned submarine and an invading tank. All and all, a nice surprise and hopefully not the last we see of Francis. (Matthew Daley)