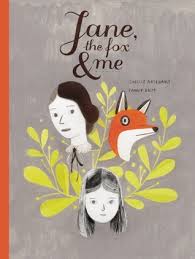 At some point, Hélène’s friends became her enemies. They began to inhabit the vicious social world of teenagers, and for no real reason Hélène has become the target of their ridicule. She doesn’t understand. Anxiety pervades her life. And a copy of Charlotte Brontë’s Jane Eyre is her only solace.

Jane, the Fox & Me is a book for and about kids, but it has plenty to say to adults too. Among the monochrome depictions of Hélène’s troubled day-to-day, the full-colour glimpses of Jane Eyre show us how what we read affects and is affected by our lives. Throughout the book, we’re shown the different kinds of forces fictions can have. The tension between the solace of Jane Eyre and the equally fictional taunts of Hélène’s peers (“Hélène weighs 216!” they write on the bathroom wall, which is untrue but nevertheless persuasive) plays out movingly from beginning to end.

Though this is both Britt’s and Arsenault’s first graphic novel, Jane, the Fox & Me makes both intricate and felicitous use of the medium of comics. Layers of anxious language build to an unexpected climax, when the introduction of the titular fox adds a shock of orange into Hélène’s dreary world. Arsenault’s realization of the characters, her various levels of abstraction and the details of her landscapes support and complicate Britt’s text. Jane, the Fox & Me is masterful graphic storytelling. (Andrew Woodrow-Butcher)