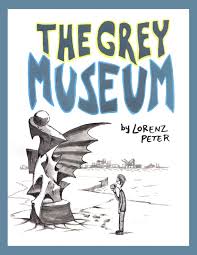 Imagine a future where the earth had dried up and humans are all but extinct thanks to an alien race of bored hipster art critics. That’s where you land in Lorenz Peter’s long-awaited return to graphic fiction after his string of well-received autobiographical graphic novels.

The story starts when a group of well-meaning but clumsy alien collectors are looking to add to their collection of mementos from the universe and accidentally pierce a passing ship carrying the last of the earth’s humans encased in ooze. These humans return to earth and while trying to rebuild their own lives and their relationships with one another, they inadvertently become the human race’s last hope against The Grays.

The Grays are the best part of this book and the most biting indictment of the lazy, self-absorbed and holier-than-thou human beings that permeate this work. They are the alien art critics who all look identical and use their powers of contemplation (always ready with a “hmmmmmm”) to turn everything on earth into contemporary art sculptures. It’s up to the bumbling humans to accidentally awaken mother nature and turn the resulting steel art exhibits back to the great outdoors.

This work certainly signals Peter as a figure on the rise in the Canadian comics community. The black and grey art style is chaotic and scribbly, which fits the initial chaos of his bizarre apocalyptic vision, but then it gets gradually more wispy and beautiful as the natural world starts to return. The whole thing is a wild ride, but just go with it: you’ll be glad you strapped in. (Aaron Broverman)