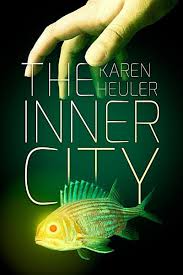 The 15 stories in Karen Heuler’s latest collection of surrealist and strange fiction cover a broad range of topics: from spiritualism and independence, to more disturbing themes of submission and assimilation.

In the title story, a woman discovers a hidden city within her city, where every conspiratorial possibility is a part of a larger, deliberate system. “Down on the Farm,” the most disturbing in the collection, introduces genetic engineering to farm life, splicing women with the temperament of dogs to force submissive behaviour and a willingness to take commands. The protagonists of “How Lightly He Stepped in the Air,” and “The Hair” find themselves embroiled in unyielding office politics determined to stamp out individuality, while “The Large People” and “Beds” offer an only-the-strong-survive perspective on both the business world and health care.

The troubles of parenthood and peer pressure are both touched upon as well: in the Frankenstein-like “Creating Cow,” a young animal rights activist creates a monster from the parts of several different animals; the parents in “The Difficulties of Evolution” want their children to mutate and evolve, but fear losing them in the process, and the fearless scientific exploration on display in “Thick Water” leaves one woman alone and fending for herself in a hostile environment.

Heuler’s blunt, sometimes matter-of-fact tone slips at times between playfulness and childishness, evoking a sense of wonder that, given the dark nature of most of these stories, adds yet another layer of distress to the already unsettling proceedings.

Only the final story in the collection, “Landscape, With Fish”, feels expendable, concluding an otherwise excellent, thought-provoking collection with an exhalation, and not the scream it deserves. (Andrew Wilmot)