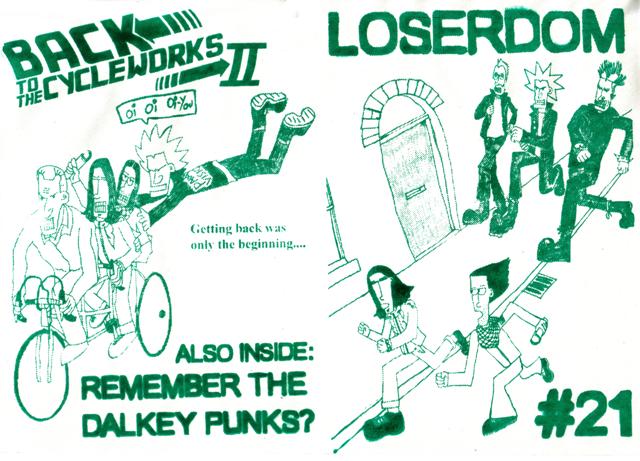 The first issue of Irish punk zine Loserdom was released in June 1996 — around the time that most zines in Dublin were beginning to fade away or change media. Anto Dillon, now 36, had been frequenting independent record stores, collecting free zines and newsletters. Deciding to get a little more involved in the scene, he approached his younger brother, Eugene, who was “handy at drawing comics,” and asked him if he would like to work together on a project. The two made their first freesheet zine, a piece of A4 paper folded into a small booklet, and Loserdom began its
descent into Dublin.

With a passion for DIY, punk, and — as is clear in later issues — cycling, the Loser Brothers (as they call themselves) made a point of supporting local artists both through profiles and interviews in their zine, and through the zine distro that started out as a stall at gigs and now travels sporadically to various small press fairs.
By 1998, with 10 issues under their belts, the brothers had a fight and starting working on separate zines. By the time they started up again in 2003, almost all punk zines in Dublin had closed up shop, says Anto. “Irish DIY punk zines are few and far between these days,” he says in an email. “The internet seems a more relevant form of expression for them; the zine scene is mostly art type zines and comics.”
Seventeen years later, Loserdom is still publishing, and though it’s slowed down to roughly one issue per year, it’s still a reliable source of information on Irish punk, activism and zine history. Recent issues have included regular interviews with “classic” Irish zine makers (the most recent issue devoting space to a feature on early zinesters from Cork) and comics chronicling aspects of the community (including an assessment of the eating habits of punks in issue 15). Anto even wrote his college thesis on the alternative voices in Irish zines. As a response to the lack of venues to sell zines, and as a tribute to zines as a format, in 2006 Anto co-organized an exhibition of zine covers with the Forgotten Zine Archive titled “Zine Show – A celebration of Zines and Do-It-Yourself publishing in the form of an exhibition of zines/zine art (both Irish and international)” in a Dublin book store.
Anto, now a father who lives outside of Dublin, may not be as huge a part of the community as he used to be, but the mandate of Loserdom stays the same: to support the punk scene, through all of its subgenres and changes; review punk music and celebrate (particularly Irish) DIY culture any way they can. (Sofie Mikhaylova)