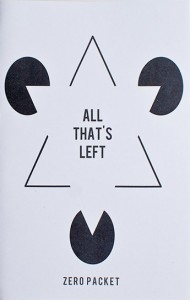 When my roommate recommended I pick up All That’s Left, they told me that it combines everything they love: queer and dystopian sci-fi. I was instantly drawn to it. The sci-fi zine genre has a long tradition but a sci-fi zine that was explicitly queer was something that was new to me. In fact, a sci-fi zine alone is usually not something I would pick up, but that was before I knew there was a queer subgenre.

The zine is beautiful and hand bound with an interesting cover and a line on the back that reads, “Not everyone is good at their body.” I didn’t know what I was in for but I was excited with anticipation.

The zine starts with a personal greeting from the author Maggie Eighteen explaining the use of both gendered pronouns and the non-binary “they” pronoun, as well as a list of characters found in the first issue. There are four chapters in here. The first is a brief description of the dystopian world the characters inhabit; the second — entitled “Ghost Town” — introduces two characters “Suli” and “Braga” on a patrol of an outlying district of the last remaining city known as “the dome.” I like this chapter a lot; it is just two men on patrol making small talk about sex. They are not explicitly gay or straight, and it doesn’t matter. Clearly in this world gender is not a central aspect of their core identity.

The juxtaposition of dystopian setting and such mundane conversation about desire and sex is something this zine does incredibly well — a blending of queerness, human conversation and the dystopian world they occupy. In the end, nothing is really resolved as there is no inherent conflict. It is just a snippet of a day in the life of these characters. If all sci-fi zines were this entertaining I would be a diehard collector by now. (Eric Levitt.)