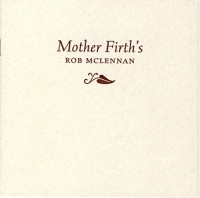 Ottawa-based writer and publisher, rob mclennan, is reveling in hometown history. Mother Firth’s is the latest addition in a growing collection of books that sees mclennan exploring the nooks and crannies of the nation’s capital. This time out, we visit Isaac Firth’s Inn/Tavern (known as Mother Firth’s), which was established at Chaudière Falls in 1819, in the part of Ottawa that’s now known as LeBreton Flats.

According to mclennan, Ottawa writers of the late 1800s and early 1900s liked to joke that “if you hadn’t written a poem on the Chaudière Falls or Rapids, you weren’t really an Ottawa poet.” The Falls and the Ottawa River are the clearest recurring images in this collection, so mclennan is now officially in with the in crowd.

While it’s clear that water or watercrafts play a pivotal role in each of these 12 poems, other concrete details are hard to come by. There are moments where mclennan’s verse reads as completely lucid: “In 1827, a year’s first light. William Stewart, / out from County Glen,” but there are just as many that come across as abstract (or perhaps require a great deal of research for comprehension): “A study of parades, authority. A letter / from Dalhousie. Build. / A snowball, given credence.” There’s a particular ambiance emanating from these poems, and though it’s too general to pin down, it seems to hint at the milieu inhabited by the men who frequented Mother Firth’s: soldiers, raftsmen, fur traders.