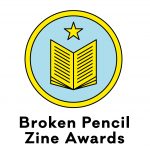 Since its inception in 2017, the Zine Awards’ goal has been to honour outstanding work coming out of the ever-expanding zine universe, and to acknowledge the talent and hard work of emerging, established and experimental self-publishers for their contributions to zine culture. We give awards to creators for recent publications in eight categories. One of these winners stands to win the overall prize of Zine of the Year.

The submission period for entries runs between April 15 and July 1 yearly. Creators register up to three entries online, pay the fee and then send us their zines as digital copies and, when possible, in print through the post.  Anybody interested in submitting should check out the detailed How to Enter page as well as the Frequently Asked Questions, which we update regularly. The shortlist of category nominees is released in August ahead of the special awards ceremony and showcase that takes place in Toronto at Canzine Festival of Zines and Underground Culture, which also occurs each fall in cities across Canada.

The Zine Awards is an initiative created by Broken Pencil Magazine and our entire staff spends half of the year planning, administrating, and promoting the Zine Awards and the zinesters who participate far and wide. It is a complex project that we continue to hone, and we partner with zine distros, festivals, libraries, stores, arts organizations and schools in our outreach efforts to make sure we are reaching beyond the usual zine world bubble.

Rather than seeing the project as a competition between zines and their makers, we see it as a chance to use our platform and our resources to give talented zinesters their due and to keep the uniquely powerful medium of zines in the public eye.

The winner of each category will receive a cash prize and a one-of-a-kind trophy, but it hardly stops there! Broken Pencil also makes the effort to raise the profile of winners and nominees by all means possible. All finalists are included in a feature display at our partner zine fest, Canzine, which occurs in at least four cities across Canada each year.

Finalists can also elect to have their work distributed in the BP Zine Store as well as in our yearly finalists  Zine Bundle, which is especially popular with libraries, retail stores and art galleries. And of course, we have a massive spread in the magazine and on the Broken Pencil website spotlighting the winners and nominees every year.

Send any other inquiries to [email protected].