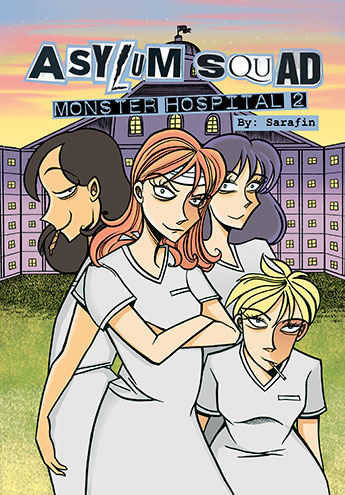 Based on the author’s own experiences in an in-patient mental institution, this second graphic novel collects the Asylum Squad’s continued adventures as chronicled in the webcomic of the same name.

This volume sees Liz Madder, a diagnosed schizophrenic who believes she is possessed by a nightmarish horse head named Armananstantanu, and her gender-bending companion Henry Chan as they finally get the skinny on the Ajna Project. Turns out, it’s an experimental treatment for schizophrenia that allows participants to create superhero versions of themselves and battle their demons from within their subconscious.

Meanwhile, we meet Sarah and Cath, the two other members of The Asylum Squad who, along with Henry and Liz, vow to rebel against their confines and the nursing staff in anyway they can. Despite their antics putting their candidacy in the Ajna Project in jeopardy, they end up being accepted — setting up the intriguing possibility of some sort of mental illness Justice League.

The magic of this series is not the rather loose plot or the obviously Scott Pilgrim-influenced, manga-style artwork, but the insider knowledge Sarafin possesses of the mental health system. The way she depicts the relationships between the Asylum Squad members and the good cop/bad cop nurses will be highly relatable to anyone who has “been there” and extremely eye-opening to anyone who has not.

She even weaves in a little mental illness activism, enlightening the reader toward the issues surrounding mad pride, discrimination, and stigma. This is where the work unequivocally shines. It’s power lies in its ability to begin a dialogue around mental illness that is still very new to most people without being preachy or heavy-handed.

The Asylum Squad is a superhero team like no other, as they undoubtedly will be pitted against mental demons that many more still fight in silence. (Aaron Broverman)