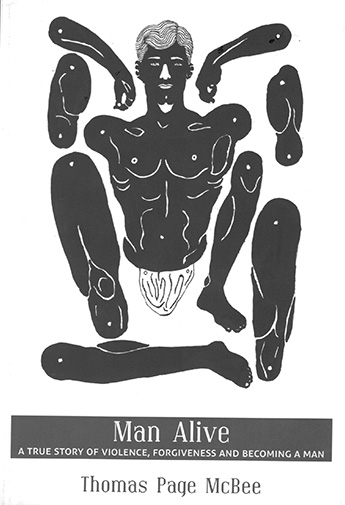 In April 2010, Thomas Page McBee and his then-girlfriend, now-wife Parker were held up at gunpoint near their Oakland, CA neighbourhood. They survived the attack, but its aftermath left McBee in a tailspin, reflecting on the nature of maleness in the face of violence. Two other important points colour this realization: McBee was also the survivor of sexual abuse enacted by his father, and at the time of the attack, he was grappling with the decision of transitioning from female to male. What does it mean to be a man when violent, flawed men feature in your strongest memories, burrowing into your core? This is the question posed in McBee’s wrenching, candid and deeply lyrical memoir, which is both a fictionalized exploration of trauma and reconciliation, and also a story of a person reclaiming their own identity, making strides towards their truest self.

The search sends McBee traveling — post top surgery — to the sweltering South Carolina town where his father lives, enduring the stares and hostile vibrations of strangers. But their stares pale in comparison to the task of peeling back the layers of a situation coloured by fictions and half-truths, and as we accompany McBee, these revelations twist the knife of self-knowledge and self-analysis. This is an awful pain, but it is necessary for McBee’s development, and necessary for us, the readers, to understand who he was then, and who he is now.

McBee is a lovely writer who leaps expertly between scenarios, memories and time frames. Alongside his journey home, the narrative flips back to Oakland and the trial of McBee’s attacker, who is arrested for murder; memories of McBee’s painful, silent childhood in Pittsburgh, and his present reality, moving to a new city with Parker and working through his preparations towards transitioning. A less gifted writer could stumble amidst all these threads, but McBee’s narrative voice is clear and sure, and weaves through each moment with an aching surety.

“It’s not fear that kills you, but what you do with it,” advises McBee’s personal trainer at one point in the book. McBee has opened himself and shown his fear to the world, and turned it inward, a knife point to remind him where he’s come from, what he’s endured. Empowerment feels like a hollow word to describe such a naked and moving experience, but Man Alive nonetheless provides a revitalizing, strengthening affirmation of self-knowledge, of understanding, and yes — forgiveness. (Alison Lang)