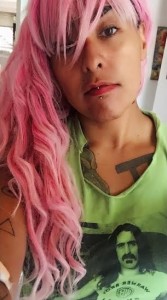 Underlying the work of the “conceptual” or “uncreative writer” — those writers working with found, automated, or tightly constrained text, for example — is a presumed desire to disengage with texts, to eliminate the human element in their work Conceptual works with found texts can employ the contents of a presidential speech, articles in a newspaper, signs on the street, interviews with people, radio or television transcripts, legal documents, or just about anything composed of letters.

The results can be spontaneous, surprising, and even poignant at times. For example, I worked with headline stories from The Wall Street Journal and remixed them with pages from George Orwell’s 1984. The results frequently read like gibberish, but sometimes they would showcase Orwell’s eerie prescience of the future. While a WSJ headline would read, “Intelligence Gaps Crippled Mission in Syria to Rescue Hostages James Foley, Steven Sotloff,” the Orwell text that would follow would say, “”They can’t get inside you,” she had said. But they could get inside you.”” It was almost as if Orwell was remarking on a future headline from the past.

But as uncreative writing and found texts stumble into this decade, quickly changing media and political contexts mean radically different stakes for this kind of work. We live in a world of excess text, texts spiraling out upon themselves. Not a day goes by without a controversial Facebook status or tweet. There is always something to comment on. The threads that spin out of the synchronous nature of social media create a limitless amount of metadata.

This data is ripe for the taking to a conceptual writer. But as always, we must ask, is there a limit to what a writer can use? As found text and uncreative writing increasingly crashes its way uncritically through the landscape of digital texts, we are increasingly unsure: can a writer take something like the very personal element of pain and appropriate it for art without taking a responsibility on how it is used or why it is used?

Sure, freedom of speech allows for the conceptual artist to find her inspiration in anything, and for the art to, at least nominally, stand on its own. For some, utilizing found texts ostensibly takes the writer out of the work, thereby liberating the artist of the meaning behind their experiments.

Because of this supposed artistic disengagement with their work, the conceptual writer may be tempted to presents their work without a need to explain the result, to assume that the art lives separately from the creator. Invariably things become more complicated when the found text is sourced from a controversial source.

At this moment, I’m speaking of events that involve human tragedy or historical atrocities where pain is deeply rooted and thereby making certain subjects untouchable to many. Some find healing or useful therapy by creating art out of the detritus of traumatic events while others may use components of a tragedy to create a commentary on it.

As a writer who dabbles heavily with the conceptual, I find it hard to believe in the idea that one can completely extricate the “I” in conceptual writing. There’s an element of choice burdened to the artist when initiating a work and an inherent responsibility to finishing that work to completion. As an analogy I like to think of all art like the birthing of a child. A parent’s responsibility for bringing an extra life on this earth is to keep it alive. It must provide the tools that will help that child grow to become a functional and contributing member of its society. In conceptual art, the artist “births” their project from a design in her mind and nurtures it until they releases it out into the world. The resulting art becomes a functional statement, living independently, and contributes to the world by merely existing. Whether the work is conceptual or creative, this is the joy of making and enjoying art. Art lives on beyond the creator.

However, when a piece of appropriated art exacerbates existing pain beyond the commentary or hurts beyond the realm of good intentions, the artist must critique their objectives in creating the work. Their child has become a monster and while the child makes its own life choices, the parent still feels culpability for that child’s transgressions. What is the point of art if you don’t own the animus behind it?

Art is unfinished if it does not own the answerability of the destructive pain it can cause. For every artist that mileage may vary.