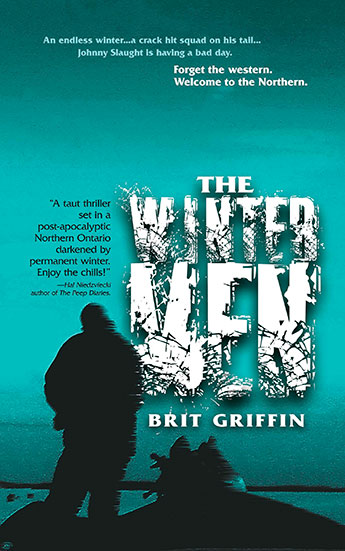 Imagine a never ending bone-chilling winter, a harsh landscape with a few unlikely heroes-turned-outlaws, on a post-apocalypse backdrop, with a handful of baddies, and you’ve got Brit Griffin’s The Wintermen.

Set in northern Ontario, Griffin’s first novel is a story of survival. Crazy weather wreaks havoc on the world and ends up getting stuck on winter mode, throwing Canada into what seems like the start of the next ice age. Resources quickly become scarce, causing the government to hire a private security company, Talos, to deal with unruly citizens.

Johnny Slaught, the main character, is turned into a modern day Robin Hood one fateful night and ends up leading a band of outlaws who need to hide from Talos. The Wintermen soon start a haven for people who have lost their homes and need help battling the elements.

Primarily, this story deals with the threat of the law, with the danger of the cold staying to the background. The plot is thrilling and enticing as the reader follows to see if Johnny and his gang will successfully beat the “man”.

The branding of this new genre, the “northern”, is also intriguing. While westerns are usually set in the dry heat of, well, the west, it is a far cry from the dry cold north.

It felt strange that although the book is based in Northern Ontario, there were only two Indigenous characters, explained by the fact that they are all still on the reserve dealing with the weather in their own way. Although this may be realistic, there certainly was a missed opportunity to make connections between the similarities of the plight of Indigenous peoples and the characters of this book, having been abandoned by the government and subject to the theft of resources.

Brit Griffin’s debut novel successfully reworks the western genre to fit a chillier climate, while keeping with the traditional struggle of the outlaw to do what is right. (Carissa Ainslie)