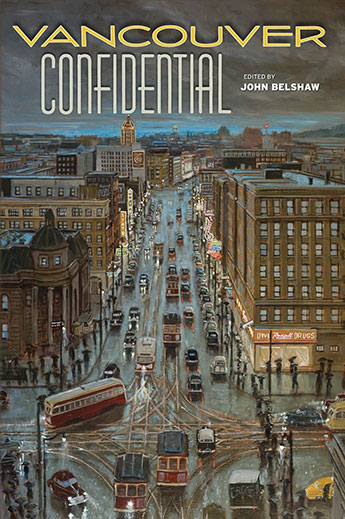 For some, it may be hard to imagine Canada having a seedy past. Turn-of-the-century urban woes like racial tensions, violent picket lines, unruly mobs, political upheaval, and crime conjure up associations with American cities like New York, Chicago, San Francisco, or Los Angeles. But… Canada? It couldn’t be!

Professor and historian John Belshaw aims to set the record straight in his anthology Vancouver Confidential, a set of 15 essays that explores the dark and salacious side of the city during the early to mid-twentieth century.

Belshaw and his contributors regale us with sensational backstories of Vancouver’s brothels, hobo jungles, and vaudeville theatres and unearth tales of the city’s forgotten murderers, mobsters, and crooked politicians. Several common threads emerge throughout, notably, the challenges faced by Chinese and Japanese immigrants due to xenophobic public policy; the important role played by Vancouver’s bootlegging moguls during Prohibition; the bloody battles waged between union leaders and capitalists and the difficulties municipal leaders encountered as destitute out-of-work migrant laborers flooded the town in search of jobs.

The highlight of the collection is Belshaw’s tribute to James Crookall, a self-taught amateur street photographer who captured the bustling cityscapes of Vancouver during the Depression and Second World War. A dozen of Crookall’s stunning black and white photographs are included and offer the reader an honest glimpse into the lives of mid-century working class Vancouverites.

Interestingly enough, only three of the essays are authored by “card-carrying academics,” while the rest are written by crime researchers, journalists, tour guides, musicians and independent historians. The diversity of voices certainly strengthens the collection. Each writer demonstrates a passion for the details and brings to life key figures and events that would otherwise be lost to history. (Melissa Hergott)