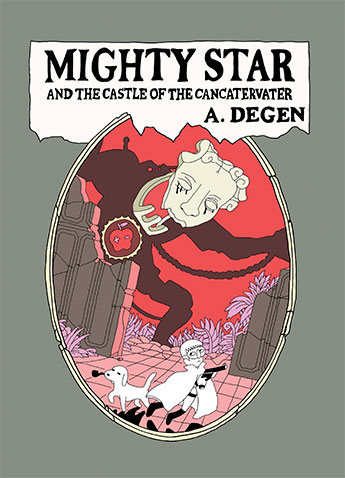 Koyama Press has a habit of taking risks with artists, but even then it is hard to imagine how a neo-baroque-meets-Dragonball Z superhero comic made it through the selection process. Mighty Star and the Castle of Cancatervater did just that, and despite its handful of shortcomings, the volume is as fun and quirky as it means to be. A larger question, though, is whether or not Mighty Star makes the kind of philosophical statement it intends to, and this answer is less certain.

Alex Degen puts together an impressive universe for this six-part story arc, boasting clear influences from Gothic tradition, Godzilla films, 90s anime, and classic Superman comics. The combination is a surprising success, and every setting rings striking and unexpected, whether it be the innards of a life-force-extracting factory circa the Industrial Revolution, or the Garden of Eden turned sour, with Adam and Eve clones hanging from branches by their apple-necks. Exploring Degen’s myriad of settings may be the most enjoyable part of Mighty Star, and that’s no slight.

That being said, Mighty Star himself is forgettable, drawn as a young everyman in a Zorro mask, and Degen’s refusal to use dialogue (as successful as it might be in emphasizing sound effects) takes away our ability to connect with the diverse cast. This gripe comes with the noted exception of Cancatervater himself, who is an unnerving, dynamic villain. Cancatervater develops further every time the reader encounters him, in direct connection to the growing sense of unease felt as the volumes progress. The villain is a theme embodied — an ever-larger pile of violent stuff!

Degen’s ability to show characters overcoming oppressive philosophy may have been hindered by his non-dialogue method, but it was by no means maimed. Mighty Star remains a solid read, and it’s one I’ll return to. (Joel W. Vaughan)