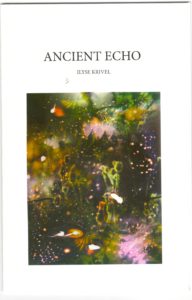 On first read, I thought this title was a reference to a song by Mount Eerie. Technically I was wrong, (the song is “Ancient Questions”), but spiritually I was right. This ethereal, fragile series of prints by Toronto-based photographer Ilyse Krivel has the same reverence for nature and wandering dream-like tone as the songs of Phil Elverum. Aside from one rolling, stream-of-consciousness poem that spans themes both infinite and intimate, the bulk of the Ancient Echo is a series of hazy, disintegrating photographs. Kaleidoscopic fragments of plants, sometimes barely visible beneath the buckling film grain convey a sensuous feeling of memory made tangible.

The illusion is marred by the print quality of the zine, a colour laser print on a satin card stock. The images themselves are beautifully tactile, but the printing makes them feel glassy and inaccessible. Krivel’s Etsy store also lists one-off prints of the works featured in the zine. Ancient Echo is still a striking collection of ghostly works, but I suspect that the prints in their original form are where they really shine.