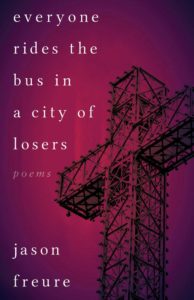 In the interests of full disclosure, I was inclined to love this book before even having a peek inside. I would probably read a phonebook and find the natural poetry within, if it bore the misFit book imprint. That’s just how highly I regard the brand Michael Holmes oversees. And the title of this one, well, I think is brilliant. Jason Freure’s work was new to me, and I would certainly look for more of it. Imagine Allen Ginsberg, with fewer cocks and shorter sentences, holding forth on the Berri UQAM subway plat- form, and you have a flavour for Freure’s subject and approach in this book. In place of ratcheting boxcars and the machinery of night, you get the clatter of roller luggage, drunk girls in gladiator sandals and “the things that I know now that I’m not young enough to know everything.” However, the tone is more sardonic than orgasmic. His go-to locations are Le Cagibi vegetarian café and the Ultramar rather than a California supermarket.

Freure incantations are breathless, urban and gritty. His poems take you from Mile End to Verdun, which you learn is “only the edge” of nowhere (rather than the middle). It is an homage to the city of Montreal writ large. You don’t need to love Montreal to love the book, but it might help. And what kind soulless wretch doesn’t love Montreal, or want to love it better?