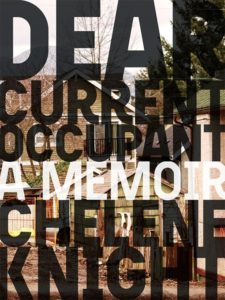 Despite featuring 23 full-colour photographs of Vancouver’s Downtown Eastside, Dear Current Occupant is neither a treatise on the author’s childhood neighbourhood nor a message to its residents. However, what the book does accomplish, is probably more impressive. Through personal essays, lyric poems, and poignant fragments of short prose, Knight remembers her fraught childhood into a powerful narrative of Black female self-invention, setting a strong example for anyone caught in histories of struggle.

Progressing rapidly from early memories through adolescence and adulthood, Dear Current Occupant is punctuated by vivid recollections of extreme poverty, Knight’s mother’s drug use and sex work, and the single-parent family’s frequent eviction and resettlement. What really gives these moments life is Knight’s emphasis on material detail: “That slow orange light with dusty pink — some would call it rose, or maybe the ‘colour that comes before the bleeding starts.’” Also remarkable are the book’s candid depictions of Black women’s experience, such as the emphasis “good hair” or the way in which “everyone saw me from the outside in.”

One of Dear Current Occupant’s open questions is its generalizability, either to the Black experience represented by these tropes or to the Downtown Eastside’s diverse inhabitants. While the book’s framing material invokes key issues in societal race relations — the lack of Black gatekeepers at the beginning, and systemic racism in CanLit at the end — the main text doesn’t answer these questions on a societal scale. Far from pushing her personal experience onto a wider social world, Knight’s writing animates an intensely private mythology that gives her life meaning for herself.