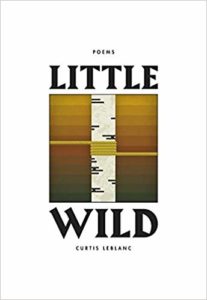 Curtis Leblanc, a West Coast poet and editor — Vancouver by way of St. Albert, Alberta — has released a poetry collection about life in the Prairies — warts and all. It is not a new theme: the exploration of rural life, the hardships that happen only in these seemingly forgotten areas of the country, whose existence we city people measure by how much pain is inflicted upon them and then shown in the nightly news.

Leblanc eschews a feeling of already-known information, and gives us a first-person, “I was a part of it too” account. He discusses addiction, adolescent troubles, beers, joints and later, painkillers. He tells the stories of the jobs that provide early sustenance, but which become the chain that binds people to a life of hardship only softened by the ever presence of drugs and booze. It’s heartbreaking. Yet, these stories do not impel any change — they just show how life can be sometimes.

He writes in an effective, Wordsworthian — though I’m sure he wouldn’t want such a label — free verse and form that makes this a very prosaic form of poetry. And most of Little Wild’s three section are written in this highly personal first-person form. The middle section, called “Bucky,” presents an interview between the poet and his grandfather that offers a more subtle look at life in the Prairies. The 10 subsections discuss Kelly Buchberger, a former captain of the Edmonton Oilers.

In lines like “that fire happened / he was twelve / got his leg burnt / that day / he never wore / socks again / I heard he wore/ barefeet in his skates…,” we see the sort of conversation you could imagine the Leblancs having around the kitchen table. This dialectic, impersonal and yet revelatory in its look at hockey culture middle-section and the bond it provides makes this excellent collection all the better.