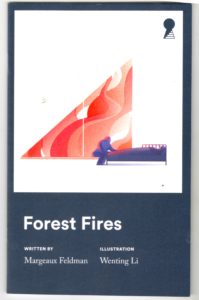 “You can give this eulogy about trees,” Margeaux Feldman tells herself. “He’s been celebrated enough.” The whole of Forest Fires — an essay adapted from a eulogy, on the death of Feldman’s father — could be boiled down to that single passage.

Feldman dives deep into facts about tree life, community and death in this — both because it affords apt metaphors for her situation, and because it’s a way of talking about her father without actually talking about her father. She doesn’t avoid addressing her grief, but a cold detachment permeates much of what she writes. It’s indicative of the state of mind that’s required to deal with the business end of the death of a family member. She writes, “Just as the trees have turned to ash, so too has his body.”

Forest Fires is an elegant treatise that likely wasn’t written in the spirit of catharsis, but rather as an attempt to “reconcile the irreconcilable,” as suggested by the essay’s editor, Erin Klassen. “[T]he biggest surprise about grief is this,” Klassen says. “It happens in the body.”