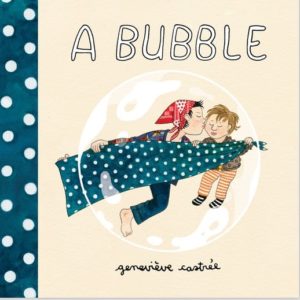 The late Geneviève Castrée was a multi-talented artist, who made beguiling minimalist music under the name Ô PAON and published a number of graphic novels, most notably the acclaimed Susceptible (2013, Drawn & Quarterly). She caricatured herself with extremely pale skin, lit by a scattered blush of freckles framing her cheekbones, and this contrast provides the abiding sense I get from her output: it’s lonely, snowy cabin work, yet a vital warmth glows through it.

A Bubble is a cardboard picture book intended for small children. Its story is told from the perspective of a young girl whose mother (Castrée herself) lives inside a bubble that prevents her from leaving the house. As the simple tale progresses, there are visual hints that the bubble represents a serious illness, but the story cuts off before the situation can be clearly resolved. “She didn’t get to finish,” a brief endnote from Castrée’s husband, musician Phil Elverum (Mount Eerie, The Microphones) explains.

It’s difficult to evaluate A Bubble independent of Castrée’s passing at age 35 from pancreatic cancer, especially given its incomplete state. Its greatest value to kids could come as an opportunity for parents to discuss its incompleteness, and in so doing safely broach the matter of death; Castrée’s love for her child is apparent on every page, and it may prove a comfort to other children as well as her own.

The greater portion of the audience, such as it is, will likely prove to be adult admirers of her previous work. Castrée is truly a master of texture. You can almost feel the fabric of each character’s clothes, corduroy and flannel and wool. If, as Elverum suggests, the book was intended to tether her in some way to the world, it follows that the fine details of this final work should be among her most vivid and tactile.

For readers of the raw childhood memoir Susceptible, A Bubble will feel particularly bittersweet. Having learned how difficult Castrée’s own upbringing was, it’s heartening to catch a glimpse of the sweetness of the life she built for herself in the short time she was allowed. It is this, and how richly these drawings capture the small intimacies of motherhood, which will linger on after the sorrow has faded.