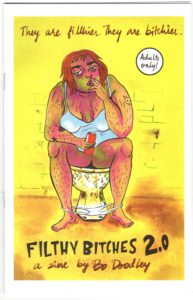 The cover of issue two of Filthy Bitches boasts that it’s “even filthier.” Doodley does not disappoint — the bitches within are truly filthy. The cover implies that well enough, with a woman on the toilet smoking and drinking a beer. The zine is 10 pages of full colour art depicting women being gross, dirty, or repulsive in various ways. This isn’t sexy, naughty filthy — it’s real filthy. Doodley shows the women doing things women do when they’re alone, like taking out tampons when they get home, and farting on the couch. It’s an experiment in challenging the objectifying gaze that is constantly put upon women.

The art is incredible, and the bitches relatable. It’s easier to remember times that you’ve been filthy when you were all alone while flipping through the pages. Doodley switches between a few different media. Some pieces are done digitally, others more traditionally. Some seem to have been done with crayon, something that I can’t help but relate with childhood — which is fun to think about since kids really know how to be filthy.

Filthy Bitches 2.0 is fun, funny and offers a playful look into a part of life that isn’t often depicted. Usually filthiness is looked down upon, but Doodley does a wonderful job at celebrating and glorifying what it mean to be filthy, especially for women, who are often pressured to present as flawless and perfect. Doodley does a wonderful job at showing just how filthy bitches can be and does so in a fun way. We can only hope that Doodley keeps showing the world filthiness until people don’t question it.