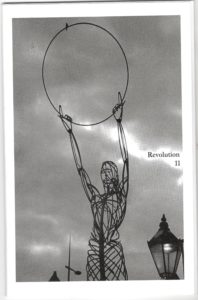 In this zine, Mark Kirkwood Callingham details the structure, mobilization, and operation of a currency-centric new world order in Revolution 11. It is a near-fully developed program for “creating a publicly owned currency system that carries a code of ethics,” or what Callingham calls elsewhere “money with morals.” His idea, called the Project for a New Economic Century, may derive its name tongue-in-cheek from the neoconservative think tank the Project for a New American Century, known for its links to the George W. Bush administration.

As a zine-sized dive into the intricacies of Callingham’s idea, the presentation is brief enough to just summarize his revolutionary scheme, but long enough to bore most people. The idea involves democratic organization and a series of intentionally inclusive party-like committees to create and operate a currency system that incentivizes good deeds instead of bad by making the latter unprofitable. Callingham does not shy away from bureaucratic detail: how committees will be composed, how they will interact, etc. The entire zine is unillustrated and plain, though there are a couple of choice quotes from the Beatles and Star Wars: Rogue One thrown in for style.

Honestly, though, I don’t think this zine is the best vehicle for mobilizing converts. It’s dry and academic, relying on logistics as its rallying cry. More power to Callingham, sure, but I don’t feel like I could get excited about a wave of change that explicitly  frames money as its heart and soul. Still, if he ever did pull it off, the new national anthem could be Wu-Tang’s “C.R.E.A.M.” without a hint of irony, and I guess that would be cool.