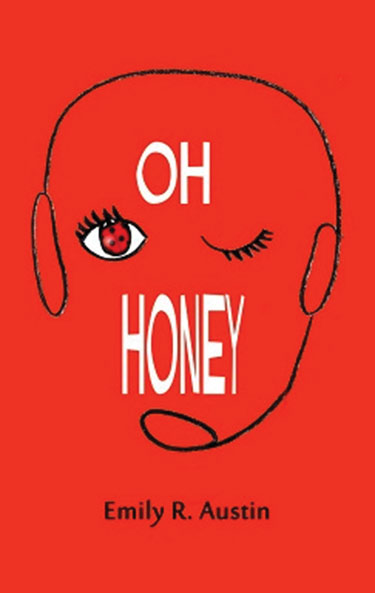 “Hi, my name is Pat. I’m calling on behalf of Broken Pencil to rev—”

Thank God I don’t have to call anyone to review this book. Jane, the heroine of Emily R. Austin’s debut novella is not so lucky. She works at a market-research call centre: “Please let me assure you that I am not selling anything.” For reasons that eventually (almost) become clear, she calls a certain man over and over again, tormenting him. Don’t worry. He deserves it.

Jane is a deeply afflicted woman, whose life is not made better by her near-constant self-destructive behaviour, from heavy drug use to physical self-harm, and her lack of a support system. There are valid, painful reasons why she’s so troubled, which emerge as the story goes on. Through it all, she remains highly endearing — unlike the other characters who vary slightly in the degree to which they are insufferable. It can be exhausting, but it’s hard not to agree with Jane’s hilarious, sarcastic asides about them.

Austin paints scenes in a down-to-earth voice that is engaging and believable, yet often disturbing. I often wanted to look away in disbelief, but the book never let me. These moments aren’t there to give the book an edginess factor, nor does it take pleasure in them.

Things get worse for Jane as the story goes on. Her reckless behaviour catches up with her and ends up having deep, permanent consequences. The only temporary reprieve from the suffering comes, oddly, on the occasional phone call at work, usually because whomever she’s calling mistakes her for someone she is not, such as a friend. But these moments end all-too quickly and reality sets in again.

Still, some moments seem excessive, like one heroin-addled, non-consensual sex scene. There’s no doubt the graphic depictions of self-harm, drug use, and sexual assault could be difficult for some readers to stomach.

Difficult as the subject matter may be to engage with, Austin’s ability to paint scenes makes this a book to check out. I only wonder what would happen if she opted for lighter subject matter in her future work. (Pat Reddick)