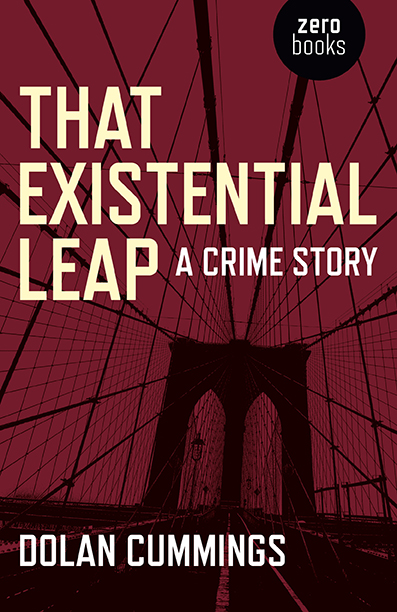 That Existential Leap: A Crime Story

Dolan Cummings built his novel around a set of ideas. The prime virtue is individualism, the prime vice conformity. There are two stories — not stories, really, but idea vehicles — loosely connected. One is set in New York and features a narrator who named herself Claudette, and her boyfriend, Seigfried. The latter is the book’s hero because he is supposedly an arch individual, demanding that the world move out of his way so he can define him-self. The other story is narrated by some sort of ephemeral being that examines a Scottish police inspector named Alexander; this arc does have some elements of storytelling due to Alexander’s string of romances. He is the head of the Occult Crimes unit, his self-defined project to negate occult motives and thus demand full perpetrator responsibility.

The philosophical discussion about free will and responsibility for both the good and evil in one’s life is the book’s strongest point. There are moments that are intriguing, such as when Satan tells Alexander how he found it “creepy” the way Jesus’ disciples followed him automatically. This suggests that they were essentially brainwashed and connects to the larger discussion of the hordes of anti-Seigfrieds who voluntarily sacrifice their precious freedom to self-define by opting for conformity. In contrast to the brainwashing rapists who abound in the novel, Seigfried’s group commit victimless crimes that supposedly accentuate their selfhood.

The problem with this novel is that I was able to fit way too much of its whole in my summary above. Aside from the somewhat involving romances of Alexander, the characters all fall flat because the entire book is summary with-out evocative detail. Cummings sacrificed the couching I intended to do by having a documentarian studying Seigfried directly criticize the useful-if-banal writing tenet “show, don’t tell.” On the same page, Claudette made a joke lambasting solipsism and I actually laughed aloud, since she and Seigfried are the most navel-gazing characters I have ever read. If Cummings had shown instead of told/summarized, he would have had to answer in advance my five bajillion plausibility questions and had living characters.

Let Seigfried stand as my example. Seigfried is a genius who can embezzle at will. As with most of Alexander’s police procedure, the mechanics of the embezzling are never explained. Seigfried, who has five or 10 lines of dialogue in the entire book, is also a masterful fighter. There are casual references to other things he’s magically able to do. If you’re going to write a book about humans forging their own identities, don’t centre it around a superhuman human. (Norman Feliks Jezioranski)