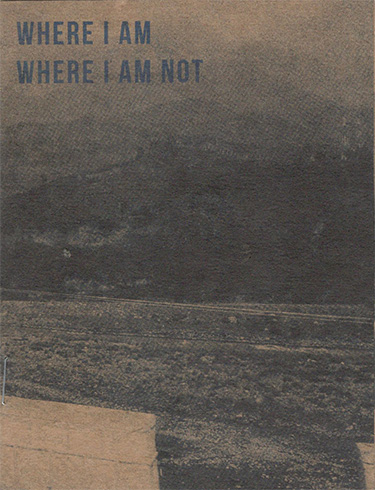 “You know, I support bombing Iraq because of terrorists,” a customer said to Rabeea Syed after she asked if they’d like a bag.

Written by Syed, a Muslim hijabi, the strength of Where I Am Where I Am Not lies in how Syed manages to show so much while telling very little. One section, “Things that have been said to me in Toronto,” for instance, is filled with sound-bites — “You’re a Muslim and a feminist? That’s like an oxymoron,” says the parent of a child Syed babysits. “Would your dad honour kill you if you didn’t wear the hijab?” a complete stranger asks — that made me want to tear my hair out, but Syed keeps her thoughts to herself. The only feeling she betrays is weariness, as her words carry the exhaustion of one who’s confronted with ignorance and bigotry all too often.

Visually, the zine is well-executed, albeit aggravatingly short. The layout of its brown pages are impactful, whether they’re mostly negative space or filled with black-blue embossed images of passports, letters and lands near and far. Images are at times hard to make out, but that only contributes to a feeling of unbelonging — of a difficultly with connecting to your surroundings.

Though explicit racism is on full display, there are quiet, subtle moments that for me, a child of immigrants, held extra weight:

Moments like these embody the disconnect children of immigrants experience, because their bodies may appear to hail from elsewhere, but that elsewhere is not home. Whatever your background, Syed’s is a zine worth picking up for its insight and heart. (Anisa Rawhani)