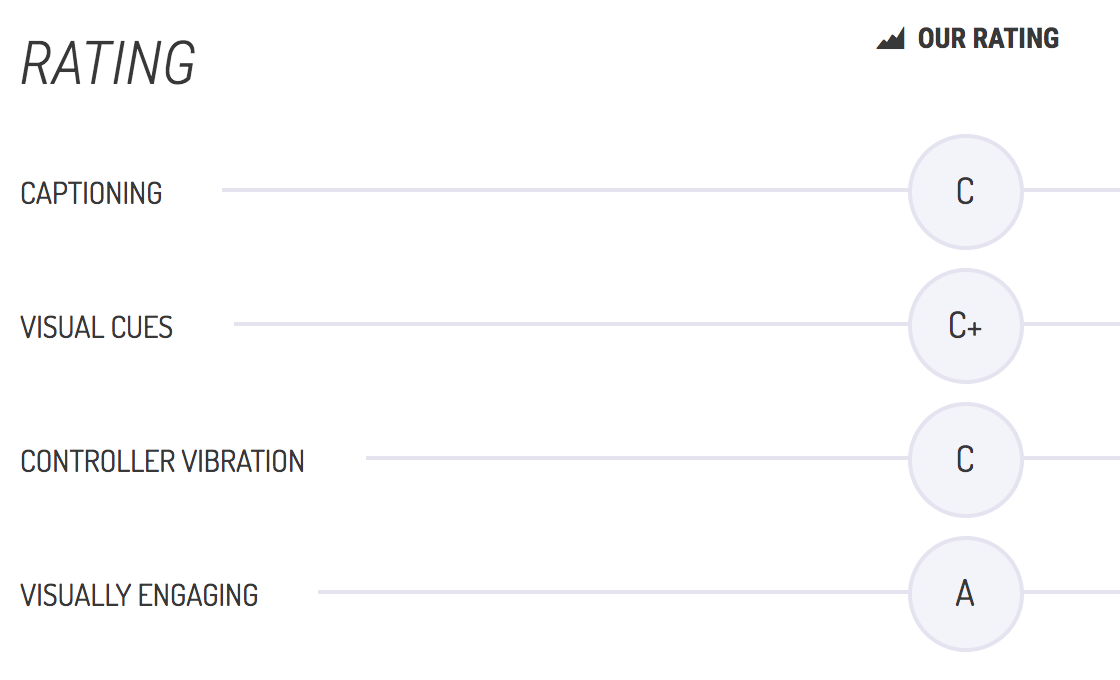 Susan Banks started her accessibility quest after dying 15 times. While playing the sci-fi shooter Destiny, she kept getting killed by the Hive at this one spot. Her assailants were a moon alien species — but the real enemy was bad captioning.

Banks is Deaf, and didn’t hear a character yelling whenever the Hive approached. The subtitles were too small to notice. Her frustration led to Deaf Game Reviews, her blog dedicated to reviewing games from the perspective of Deaf and Hard of Hearing (HoH) players.

Unlike many critics, Banks doesn’t focus on whether she loves or hates a game. The typical review process is a shallow dip, most playthroughs kept to under an hour. Her hearing partner, Courtney, then plays the same section, and they swap notes on areas where Banks had trouble, or where dialogue was uncaptioned. Then, Banks plays the game again with Courtney nearby. She rates the games on their captioning, visual cues, controller vibration, and visual engagement. Readers can also give scores to these features, which are paired with Banks’ own overall letter grade.

Banks’ site reveals that accessibility is a major oversight in game development. While commercial studios can better finance access features, Banks notes that independent creators do so more often.

“It often seems like the AAA studios are most interested in serving only their main player base, so accessibility is kind of an afterthought,” Banks wrote in an email. “Indie devs seem to be more connected with their fan base and try to stay on top of what people are asking for, which often makes for better accessibility right out of the gate.”

Solutions are easy to code. Implementing subtitles isn’t nearly as complicated as 3D physics, nor as costly as animated cutscenes. Yet, some argue that accessibility features weaken immersion, or detract from artistic vision. Perhaps these critics forget the simple toggle option, where players can turn a feature on or off.

Banks sometimes gets personal about other aspects of gaming as a Deaf Muslim woman. When reviewing Prey, a game where the protagonist’s reality is constantly in flux, she recounted her own struggles with schizophrenia. In a review of Hellblade: Senua’s Sacrifice, she praised its portrayal of hearing voices, but noted that the voices were rarely captioned.

Through her site, Banks does a service for both Deaf players and hearing creators. Banks says developers have contacted her for advice, or to let her know they would try to fix any issues she mentioned. But rather than waiting for a review, Banks urges developers pay pay attention to what Deaf players are already asking for.

“Hire us as accessibility consultants or testers, and just pay attention to what we’re saying…” Banks stated. “We’re a pretty large community, and we’ve not been very quiet about how games fail us.”