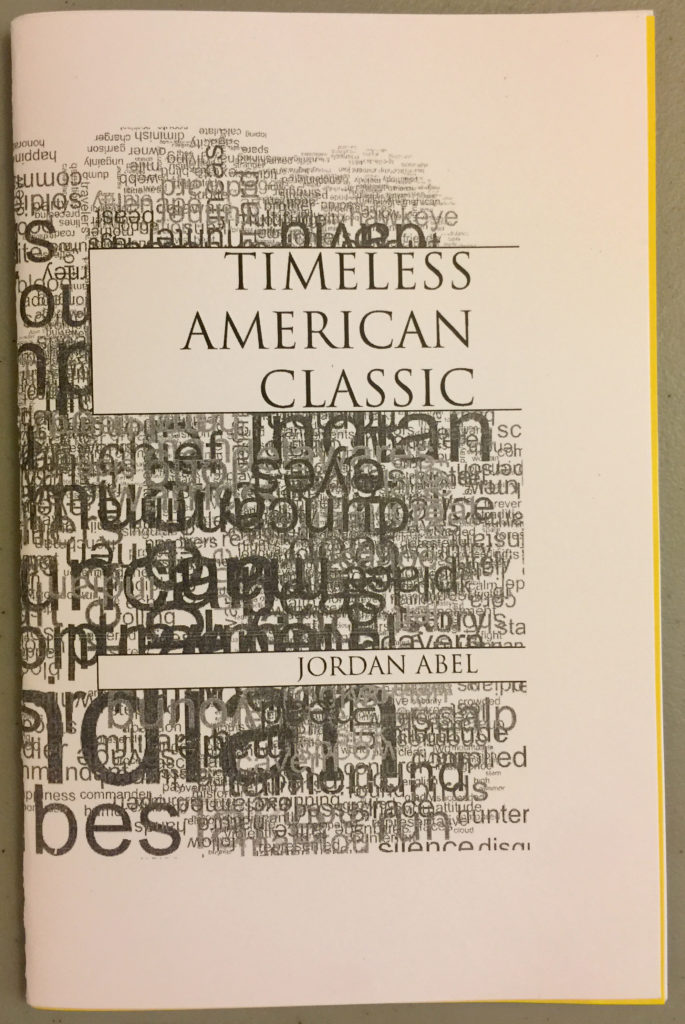 There are no easy readings of Jordan Abel’s collection of conceptual poetry. Like his previous works The Place of Scraps and Injun, Timeless American Classic takes a canonical, colonial text shreds it to pieces.

This time, Abel lifts and reorients pas-sages from James Fenimore Cooper’s 19th-century novel The Last of the Mohicans. The result is concrete poems created through a combination of machine reading, visualization and algorithmic allocation. Each piece stubbornly resists traditional interpretations, admittedly making it a frustrating read. But the value of Abel’s work lies in its operation.

Three Dudes, Some Drugs, and a Bear, By Jordan Abel

Timeless American Classic appropriates a timeless American classic. Abel reclaims Cooper’s original appropriation and, more critically, disrupts the colonialist mythologizing of the novel. It’s a sly and subversive tactic with mixed results. In a series of six poems, which all share the title “Indian,” Abel isolates Cooper’s use of the term, taking sentences out of context and placing them one after another. Rendered meaningless, Abel deftly weakens Cooper’s stereotypical depictions. In the series “Blood Quantum,” which features overlapping circles of text, the points where text collides is unreadable. Again, it’s an operation that divests the original text of its power.

But appreciating Abel’s rhetorical moves is largely an intellectual exercise. In its mathematical operation, the work lacks an emotional entryway, which might have gone a long way in combatting a novel whose dramatic thrust (it spawned Hollywood’s Daniel Day-Lewis version, after all) and imperialist romanticizing has been key to its staying power. (I. Rattan)