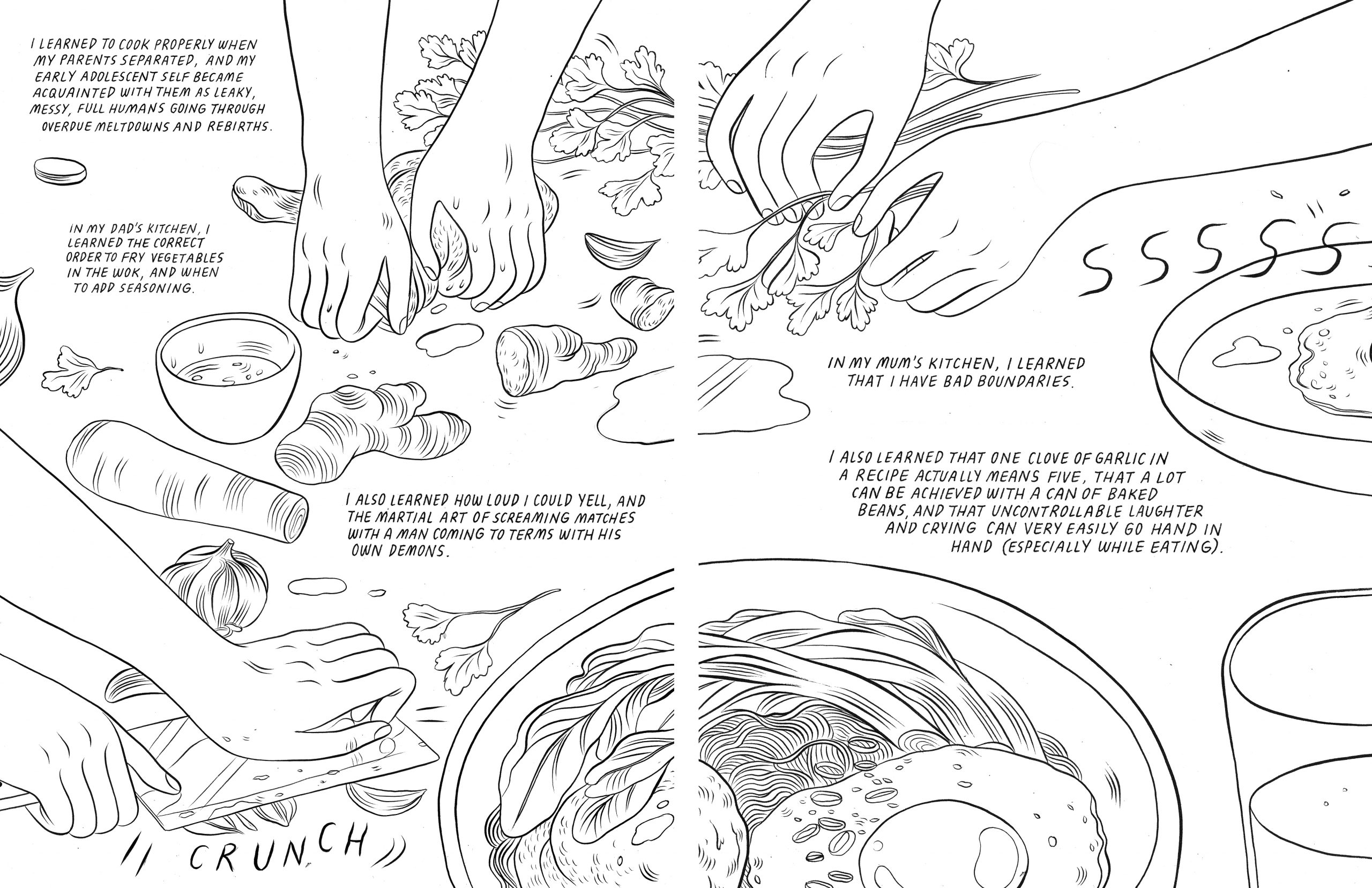 Montreal-based comic artists Sarah Mangle and Lee Lai are both pretty accomplished and well known as far as the zine scene goes, but they only actually met each other right before the pandemic hit. So when the opportunity to apply for microgrants came up, they decided to pitch a joint comic project as a means of getting to know each other. In the months since applying, life has gotten ever more difficult to manage, but the two have found comfort collaborating and encouraging each other’s creative process.

“It’s honestly been really cool connecting with Sarah in this moment,” says Lai. “As a friendly neighbour but also as another artist with a lot of overlapping values, where we can talk about what’s happening in the world at the same time as talking about creative processes.”

The two have been taking turns adding page after page to their growing zine, documenting their conversation and prompting each other. They’re envisioning that these pages will become larger-format, printed on a Risograph using two colour tones. 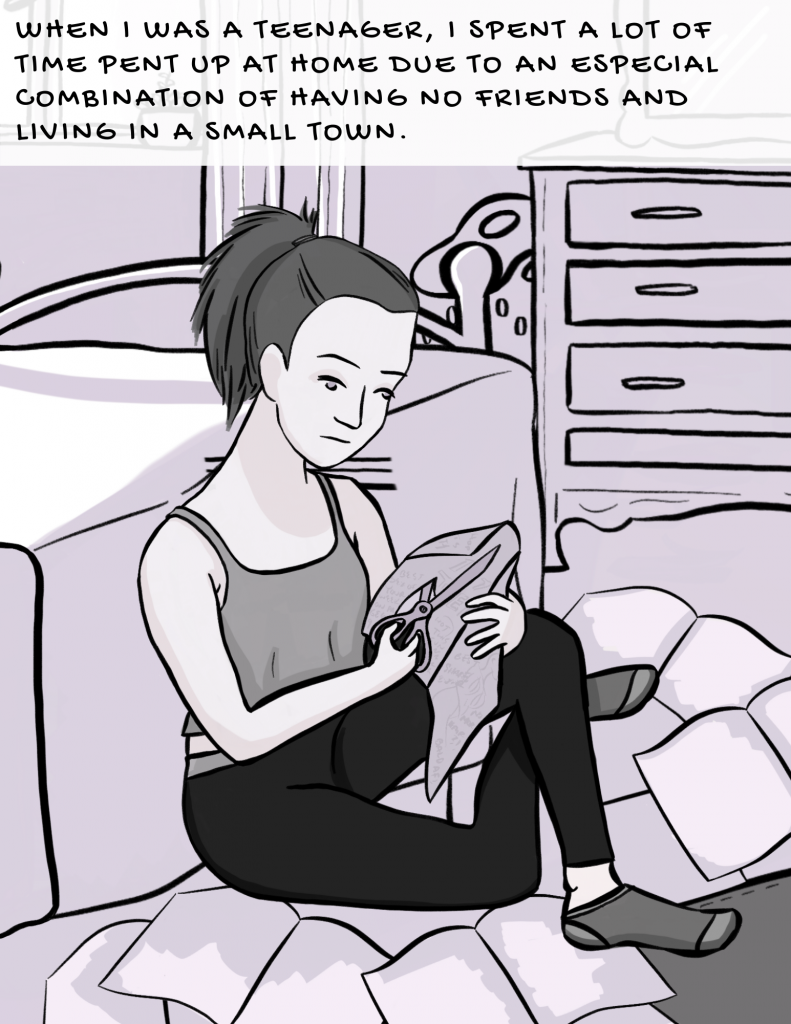 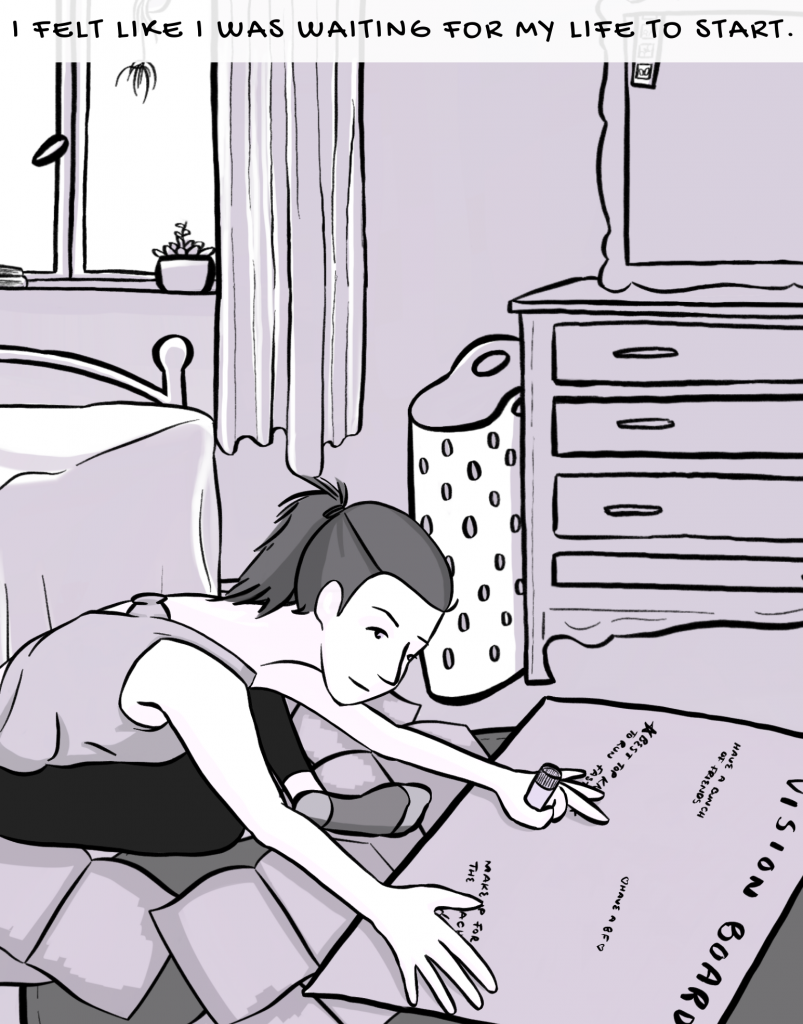 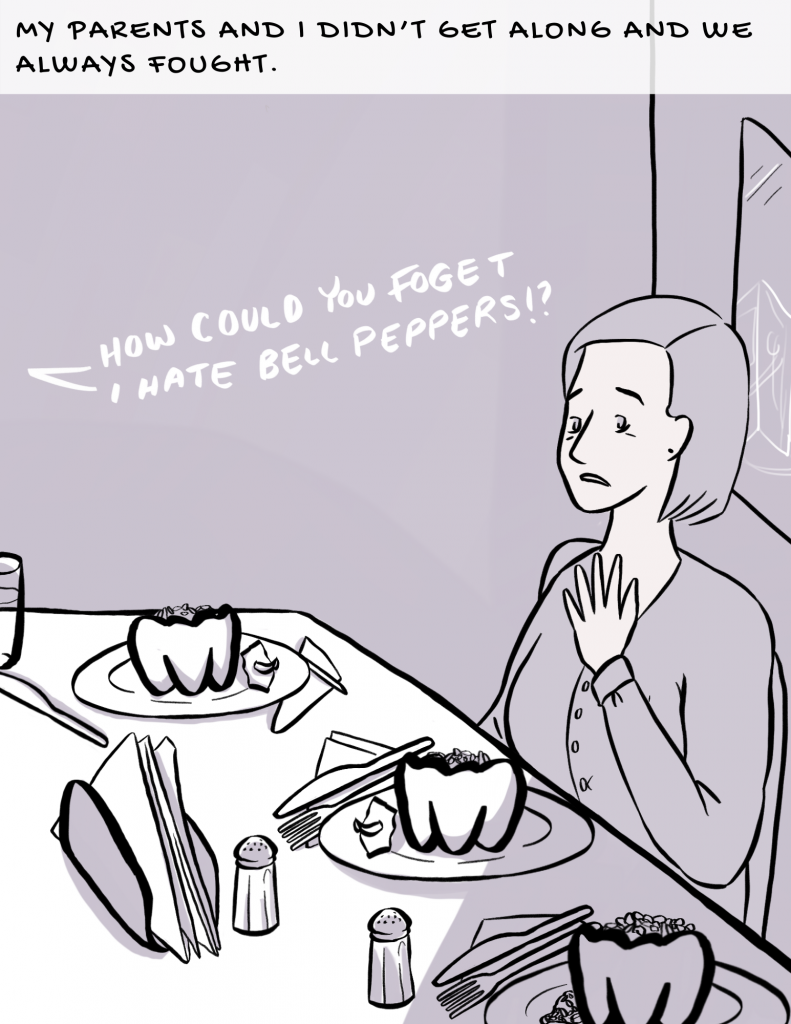 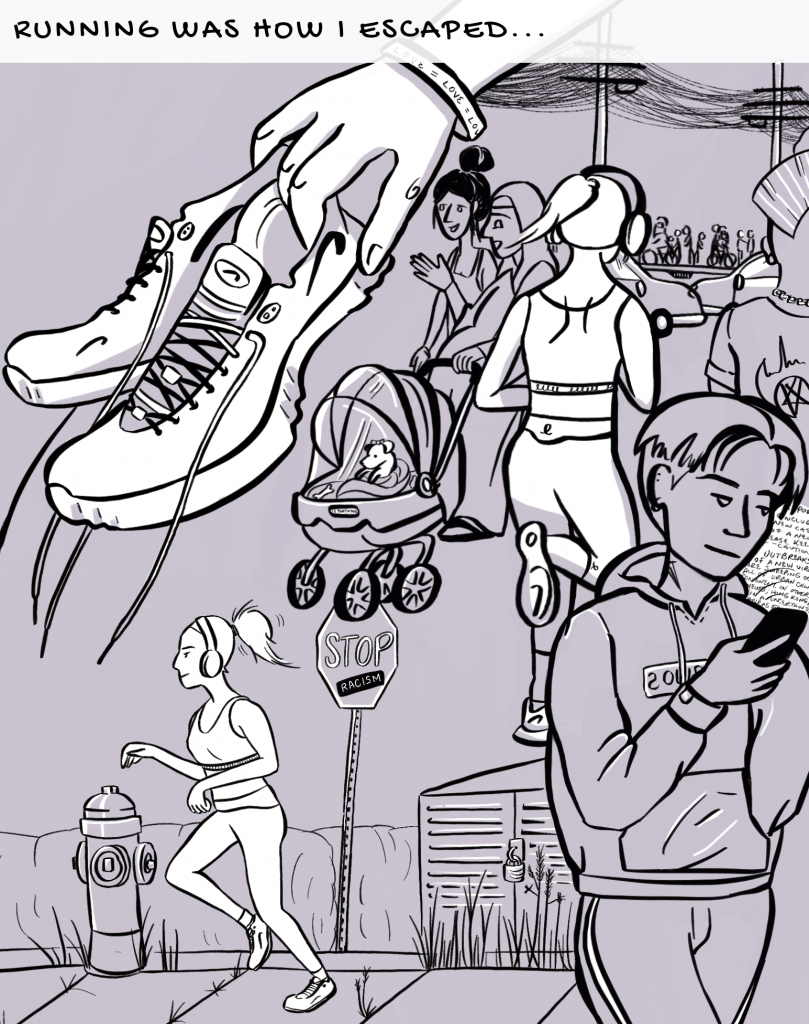 Toronto-based writer Alex Prong was new to us when she applied for the micro-grant, but was full of promise. We were hoping to bring in some good ol’ fiction and poetry writers alongside our perzinesters and visual artists and cartoonists and the like. So she surprised us when she took this opportunity to try a new medium for her writing, comics! The result is a collaborative zine with illustrator Joey Dean, sampled here. 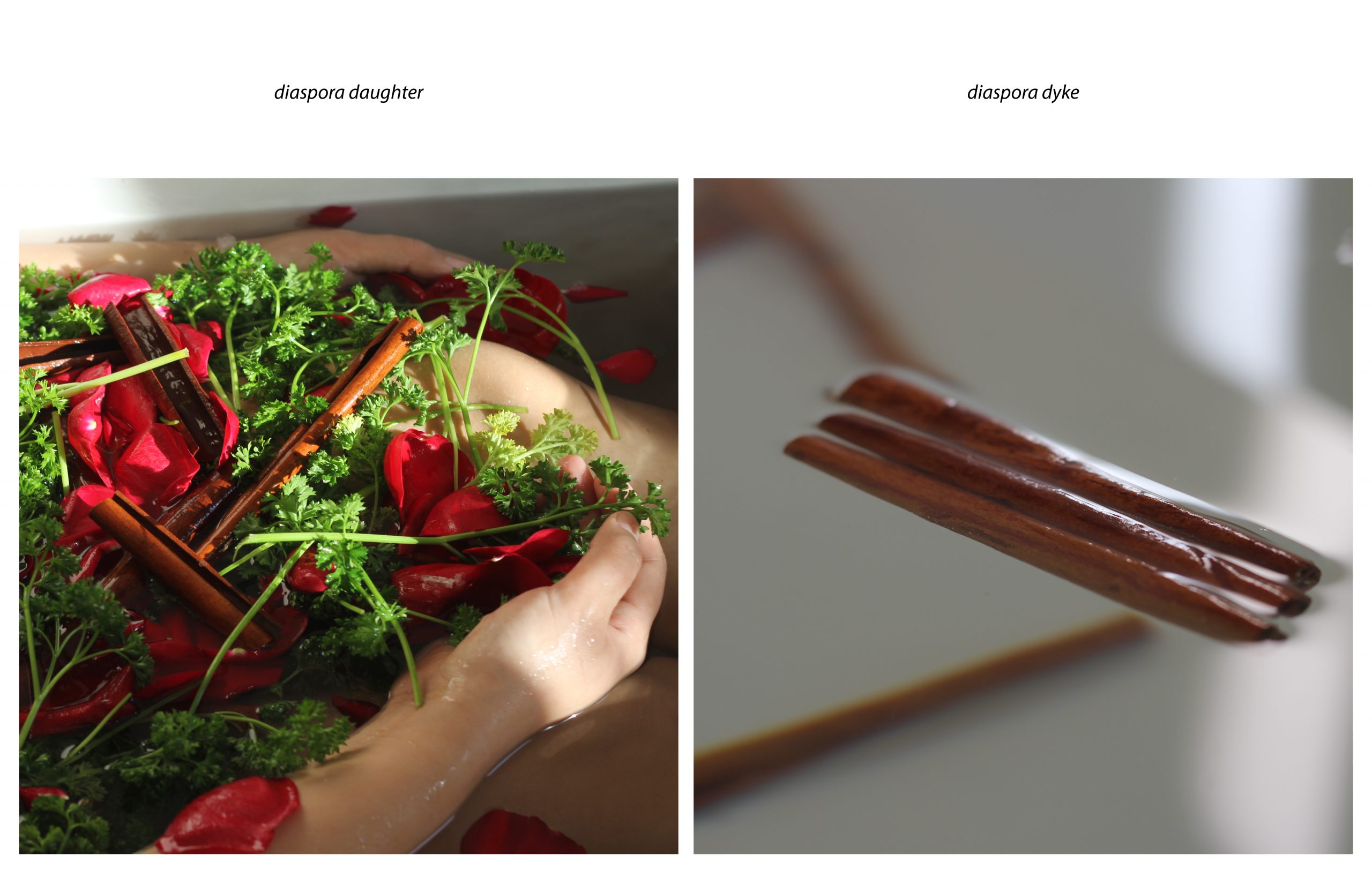 Winnipeg is a special place with special people. We learned this extra hard thanks to hosting four Canzine festivals there — so many of the people who tabled, participated, planned, and attended have gone on to do some pretty rad projects. One of those superstars is undoubtedly Christina Hajjar, a queer femme first-generation Lebanese-Canadian active in the art scene and in political organizing. Hajjar was new to zines at her first Canzine, but only a few years later, she is steadfastly keeping self-publishing energized in her city, using zines to nourish resilient communities near and far. She is the co-creator of femme anthology zine Whiny Femmes and of Carnation, which centres themes of displacement and diaspora. Hajjar also stepped up to fill the space left behind when we decided to take our Prairie-base Canzine on the road to other cities. Lippy Mart, a zine and maker’s market, was set to have its first iteration in April, but the show had to be postponed due to COVID-19. Amidst all that she juggles in community, Hajjar is also in the process of creating a solo zine project. The photo spread below comes from that work.

Christina’s recent zine and other work can be found on christinahajjar.com, and follow @lippymart and @garbagebagprincess on Instagram.