As we launch our year-long exploration of zines as political tools, it only made sense involve Bronwyn Mauldin, creator of the Democracy Series zines. The Los Angeles-based artist creates how-to guides for a variety of civic engagement tools such as protest, voting, testifying before your local government and organizing for environmental justice. She explained how and why she uses zines to empower people to participate in politics.

BP: Where did the Democracy Series come from?

Bronwyn Mauldin: When the 2016 election happened here, I was like, we’re going to be in the streets a lot, because protest is such a critical part of democracy. But when I started talking to friends about the Women’s March being planned, I realized how many people who care deeply and are very engaged had simply never been to a protest. I was shocked! So I decided to teach a workshop, and I needed a curriculum to teach from, so I decided, I’ll make a zine. And that’s where this all started.

As this project grew, why did you stick with zines?

Which is where How to Recognize Voter Suppression and Pocket Guide to Changing the World came from.

Right. I want to show how democracy isn’t just voting. That’s one entry-level step. There is so much more opportunity, and people have more power than they think. There are people who are disinvested or disenchanted who say, I’m too cool for that, or that’s not radical enough. But it’s not an either/or, it’s yes to both.

Like so many are saying, if voting didn’t matter, they wouldn’t be working so hard to stop you from doing it. If protest didn’t matter, they wouldn’t be sending the police into the streets to stop you. I want people to not feel externally empowered, I want them to find the power within themselves. I want to give them tools that they can use, so you go testify in front of a public meeting.

Your zine about testifying stands out to me the most, because people don’t do that as often, or even think about it.

If it’s the first time you do it, it’s going to be terrifying. And then you’re going to realize that those are just people that up there to elected officials are not, they’re not special.

How do you make these tools accessible, especially to people who might not be aware at all?

With each zine, it always starts with a thing you can do. What’s the heart of the thing, the action? Then how can I break it down into its component parts? You know that thing of having one idea per email? Well, I ask, what’s the one idea that I want to get across on each page of my zine?

You definitely leave a lot of space for your eyes, each spread is very clear in that way.

That’s good to know. I don’t know anything about design. I just want to mix important useful information and a bit of humour — just enough sarcasm to make it a little bit funny. But I do it in Word. Word 97, in fact.

Beyond just making them accessible, how do you make these ideas feel persuasive and grounded?

I’m a big believer in having a bibliography. And sure, not many zines have a bibliography. Something I learned very early on as a political activist is that the best propaganda is the truth. I’m only going to tell you what is true. I’m going to give you sources so you can read the original sources for yourself.

What insights have you gleaned about the uses of print in terms of engaging with deep ideas, but also towards action?

When you’re online, you hide behind this persona, and there is a barrier between you and your recipient. It’s depersonalized. We have been trained by the internet to believe that our intent or purpose is to spew outward and to reach many, many, the goal is many. It’s not about the quality of the interaction. For me, paper is a one-on-one. When I make things, I give them to friends in-person, and it’s a vulnerable thing. I’ll be having a class and handing out zines and I can say, let’s talk about what’s in the zine, and let’s talk about what it means to you. It’s about relationships.

Tell me about your most recent zine with Artists For Democracy.

It’s probably the hardest one I’ve ever had to do because the election system in the United States is so complicated. The rules are different for every state, even for every county and city. There’s no one-size-fits-all for how and when you have to register. And now, with the mail-in ballot, that information is changing every five minutes. 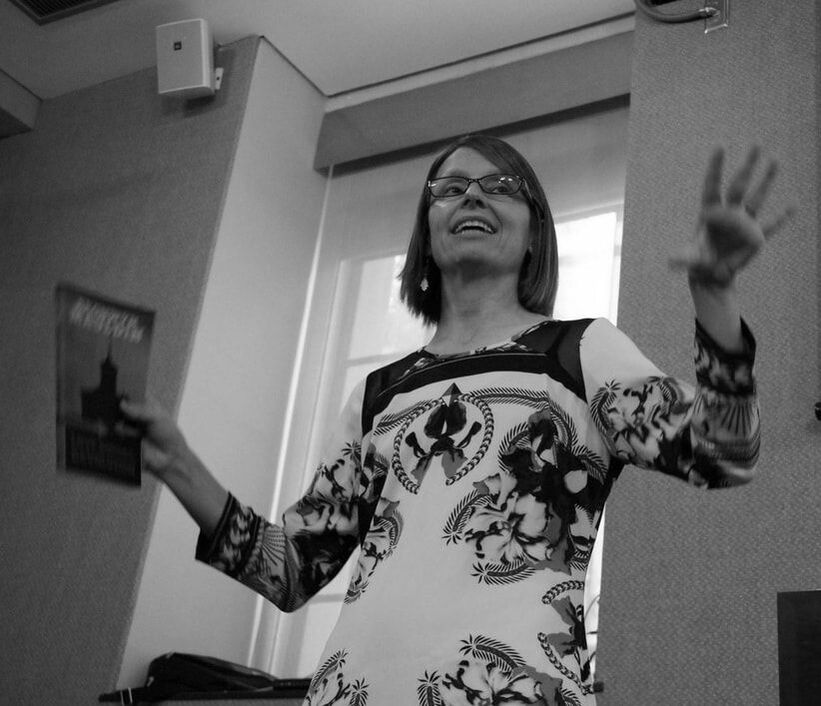 How do you know when a project like yours is working? How do you measure the impact in terms of action?

The Protest 101 zine is the place where I first really saw it. There were people who had been nervous about going to the Women’s March. One of the things I said was: in exchange for this zine or for being in this workshop, just send me an email after the first march you go to and tell me how it is. And I got those emails back, lots. They were like, “I did it, and I was nervous, but I did it!” or people told me, “You gave me confidence. You made me feel like this wasn’t scary.” So that’s where I really saw the value.

How do you respond to people who are disenchanted with the whole idea of “democracy,” or of electoral politics as democracy?

I use it as a catch-all word for a whole set of values. I’m not sure everyone sees it that way. Democracy is about everybody having a voice, and about the right to self determination. I look at the imperfect democracy that we have right now, and given voter suppression, there’s shaky ground here. There’s always a push back against full democracy.

I’m carrying a very idealistic vision of a country where all people really are treated as equal and where there really is equal opportunity, where we take care of those with the greatest needs, we take care of each other and we respect each other. So when we see a racial justice movement, that is democracy in action. Letting people die in a pandemic, that is the opposite of democracy. All of these things are interconnected. I’m not the first person to say that this pandemic is not a test of our medical system. It’s actually a test of our political system. And right now, we are failing.

But democracy is about us. It’s not about the elected officials and all that, ultimately. It’s us.

Learn more about Mauldin’s work at bronwynmauldin.com and get involved at artists4democracy.com

This interview was conducted in September 2020, and has been edited and condensed for clarity.

This article is part of Broken Pencil‘s year-long Zine-ocracy series, exploring the use of zines as tools of political action and agitation.