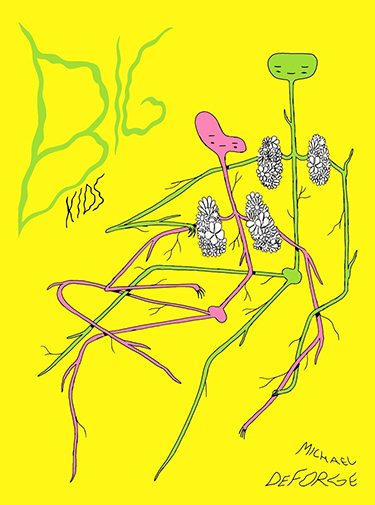 That all sounds really big and a little bit philosophy bro-y, but I mean it in the most whimsical, colourful way possible. From his Lose series and his less narrative Structures zine to this, his most recent book, Michael DeForge’s peculiar way of gazing at existential wonder makes you feel comforted and confused at the same time.

In Big Kids, Adam, a queer high schooler living in a world of pinks, yellows, and bad decisions, wakes up from an I-guess-I’ve-just-been-dumped-and-it-sucks nap to discover that he and his world look completely different. April, the student renting his Mom’s basement, explains to him that he’s finally “treed,” such that he joins some percentage of the population in seeing the world in a radically different (and extremely psychedelic) way. People who are trees now appear as massive, gangly roots and branches with flowerbed shoulder pads. However, a good bit of the population — Adam’s dad, his uncle, his ex-lover Jared, his principal — remain “twigs” and see the world as Adam once did. As Adam gets romantically involved with Jared’s new tree boyfriend, he tries to help April develop a computer program that will simulate a pre-tree reality.

Big Kids plays with our sense of nostalgia by suggesting common tropes of adolescent troublemaking — pranks, punk shows, peer pressure — and then yanks them out from under you by questioning the possibility of memory itself. Smart sequences where the dialogue Adam narrates mismatches the dialogue represented, or where he begins to question his grasp on his mother’s once familiar twig visage, destabilize the act of remembering, framing each interlude as a conflict in the present. The fact that “graven” images like drawings and graphics are the only things that stay the same when one becomes a tree imbues the real-time act of reading Big Kids with a delightfully eerie aftertaste. This is weird stuff for weird people and I can’t get enough of it. (Jonathan Valelly)