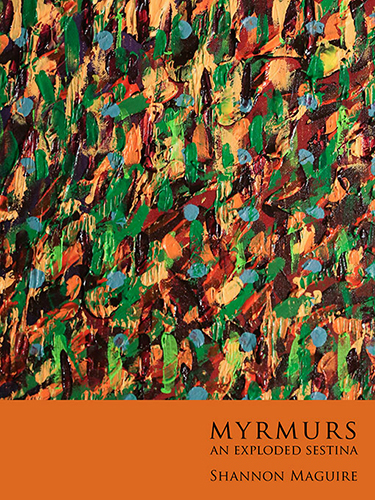 Shannon Maguire’s first collection of poems, fur(l) parachute (2014), was something of a cross between scholarly project and artistic pursuit, construing her intimate understanding of the (ironically, little-understood) Old English “Wulf and Eadwacer” into a real, tangible poetic form that is able to elegize the present day using the unique characteristics of a corrupted 960 A.D. manuscript. Myrmurs: An Exploded Sestina is an academic-artistic feat in the same vein, but it brings a kind of charisma to the page not present in Maguire’s previous work.

The sestina — a little-used form which stresses the clever use of repeating keywords — is here “exploded’ into six chapters — “Noise”, “Letters”, “Pleasure”, “Crowd”, “Volume”, “Incorrigible” — each meant to represent one of the six stanzas which make up a sestina, followed by “Tornada.”

Maguire’s dedication to formal structures ends here, however. Myrmurs, if it is to be read as a sestina, must be read as one which was blown out of proportion and tossed in a blender. The “stanza-chapters” here are intertwined and convoluted — with the notable exception of ‘Tornada’ — so that any cohesive song that might be gleaned from a hypothetical un-exploded Myrmurs is bent and near-lost in the static.

But here lies the pleasure of Maguire’s piece; for all her evidently rigorous, formal forethought, the reader’s base enjoyment comes simply from giving herself over to Maguire’s crowd of words — or rather more appropriate to Myrmurs’s theme, her colony of ants. Maguire’s approach to identity politics, relationships, and Métis poetics is built with a professional eye, and then artfully smashed. (Joel W. Vaughan)