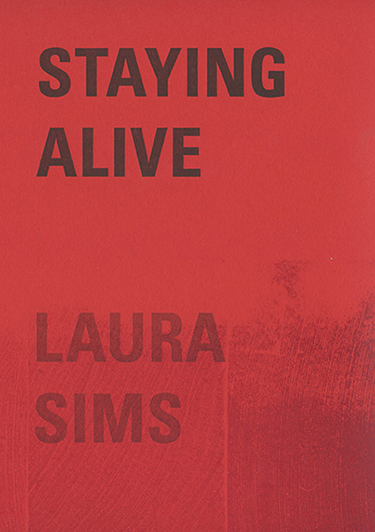 Structured as three poem sequences and an essay, Laura Sims’ Staying Alive consists of post-apocalyptic literary fragments. Slight but voluptuous bits and pieces of poems lie around on pages. The essay, placed at the end of the collection, functions as a retrospective analysis of the poems, a more linear synthesis of the poems illustrating chaos. A connecting theme throughout the collection is the humanization of apocalypse. Although bleak and “Empty / Of children,” the catastrophic landscape is described as flesh and blood with “parent cliffs” and a “bountiful lake of your torso.” Human presence, however slight, softens the blow of doom and makes it palatable, even recognizable, to the reader. Sims consistently plays with the balance between survival and destruction, between paradise and inferno. One short poem, formatted to resemble a tree, evokes the mythical comfort of the Garden of Eden, but reads: “Radioactive ambulances apples / Hanging / In the garden.”

One likes to imagine that the apocalypse is far removed from reality; that if it ever occurs, it would appear in stark contrast to the relative comforts of everyday existence. Instead, Sims turns the tables, suggesting that destruction can camouflage itself in apparent peace. In the concluding essay, Sims highlights the disparity between the devastation one imagines of the Chernobyl Exclusion Zone and the actual “images captured online by cameras hidden in the Zone [that] look like those you might see from inside Yellowstone,” a major nature reserve in the United States.

Staying Alive is clearly not a glorification of crisis. Nonetheless, poems survive beauteously within a thematic climate of wreckage and suffering. (Klara du Plessis)