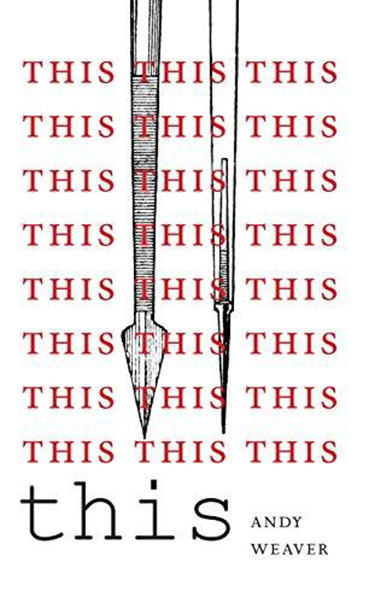 Ten pages of quotations foreground this collection and act as a preview for the subdued unorthodoxy that is to come. This isn’t revolutionary by any means — it is, at its best, wrestling with the irreducible paradox that to untie the knots in language, one must somehow do so from within language. At its worst, this is simply too self-conscious or too incomprehensible. As Weaver himself acknowledges in a quote from Gertrude Stein (“This book is interesting as there is as much failure as success in it”), any attempt made to step outside language by means of poetry is an inevitable failure, and this is therefore much more interesting in its premise than it is in its development.

Instead of individual titles, this is largely divided up into four types: “regular poems” are arranged vertically in a serif typeface; “wall of words” poems confront the reader with a brick of bold, unbroken text; “alphabetical lists” are arranged at dis-jointed angles in Courier; and finally, Weaver’s “concrete” poems appear in any shape, at any size, in any maddened arrangement. this bounces from one type to another, striking a pose that any casual reader might rightly call madness.

The collection’s strongest moments stand out in short breaks of lucidity, however, such as its likening of language to time (“what does not change / is time, the only element of change”) or, further, its connection of language-as-identity to political history (“I asked him to translate the epitaph. He could not: it was in an ideographic language that France had destroyed”). It is these memorable breaks which keep this from reading like total entropy, and they are legitimately thought-provoking. Ironically, however, their lucidity may be precisely what keeps Weaver from stepping out of language entirely, and thus the crux of this’ defeat. (Joel W. Vaughan)