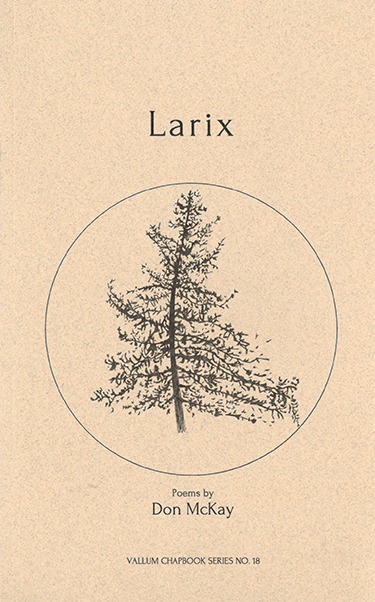 “Let’s pause and listen,” this collection begins. It’s a suggestion that molds everything that follows.

Larix is another Don McKay mediation on the fluctuations of the natural world — this one stretching from microbes to foxes to trees. McKay, a Griffin Prize and Governor General’s Award-winner, is no stranger to ornithology and botany, or to poetry on those subjects, and there’s an obvious and long-developed elegance to these poems that no doubt mirrors the elegance he sees in the wild.

McKay’s wilderness is one that can never quite be separated from humanity. Various underground organisms are entwined in promiscuous French kisses. A Larch (a.k.a. Larix, Tamarack or Juniper) “crosses categories as a smuggler / borders, accumulating aliases.” McKay’s hiking companion takes “photo upon photo” of a nest. Nature takes a turn assessing us, as well: “people, / from this fine synthetic funk and comically / blunt prints.”

Though he’s reporting on his observations, McKay admits in the end that that the significance of what he’s witnessing is perpetually elusive: “Who can sing the mystery of what actually occurs?” He does, however, tell a tale that confirms one suspected fact about the natural world: squirrels are jerks. (Scott Bryson)