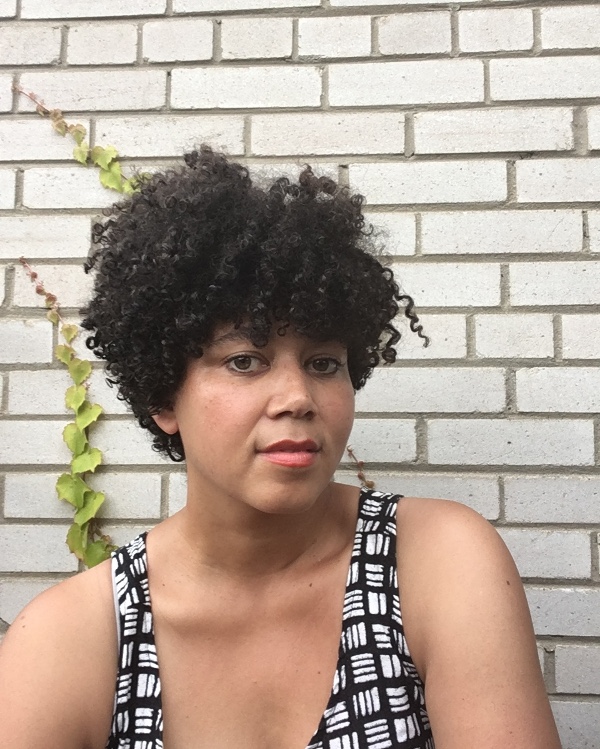 Naomi Michelle Moyer is a Mama and a self taught, multidisciplinary artist and writer. She often
finds herself delving into African diasporic (her)histories, perceptions of Blackness, community and
how they connect to Black experiences. Naomi wrote the zine Black Women and Self Care:
Thoughts on Mental Health, Oppression & Healing; and more recently her print series Black Women in Canada, which pays tribute to some of Canada's most radical Black feminists from 1793 to 2006. Moyer's work stems from collaborating with grassroots organizations and publishers, designing posters, t shirts and illustrations with themes of resistance and empowerment.

In 2016, the word 'woman' still remains synonymous with cis, white, able-bodied, skinny and middle-class in North American imaginations. I briefly hesitated on naming my zine Black Women & Self Care because I didn't want to exclude other Black people who exist across such a broad spectrum of intersectionalities. But the title is intentional — black women deserve more representation and more care. I know many folks may see the title of my zine and automatically think that it isn't for them, but it can be. My zine isn't one-dimensional; nor are Black people, nor is mental health.

As a Black woman growing up in a small, predominantly white town in northern British Columbia., I am familiar with exclusion. I was often bullied in school and lived in an abusive household. Anger has been a huge part of my life, as well as depression. Not even five years ago would I have admitted this publicly. I still feel ashamed sometimes. Although writing this zine was a very natural process for me, I still feel far from an expert when it comes to self-care. I get angry, I get depressed and I am still challenged in confronting these emotions. When another person reads my zine and thanks me, the more I learn to love and accept the many elements that make us human.

Last fall, I had fun tabling at my first zine festival as part of Canzine in Toronto. One thing I noticed was that many non-black people smiled at me but didn’t stop by my table. Perhaps they were interested, but they didn't see themselves represented in my zine? Regardless, many were curious.

Some folks who purchased Black Women & Self Care had an explanation as to why they were buying it. I cannot count how many similar stories I heard from people who said they were buying the zine for their “Black friend.” I am puzzled why some folks feel they need to explain themselves. I constantly consume things that are explicitly created by and made for white people, and I'm never awkward about it. My days would be pretty redundant otherwise.

people who said they were buying the zine for their “Black friend.” I am puzzled why some folks feel they need to explain themselves. I constantly consume things that are explicitly created by and made for white people, and I'm never awkward about it. My days would be pretty redundant otherwise.

I am saddened there has been zero interest in my zine from cis black men. I am endlessly interested in zines written by all Black folks. Black women who expresses themselves and who speak about their own experiences with oppression are invaluable. Our empowerment means that more Black people are empowered. If we all have a story to tell, we will all have a story to read.

I bought my first zine in 2002. It was poetry written by a Black woman, Turiya Maylann Autry. Most zines I bought in the early 2000's were about women and health, which helped me shape my focus for Black Women & Self Care. I like to be in control, but ultimately it was the potential for freedom in the zinemaking process that inspired me to make my own. I enjoyed the whole process: from the writing, illustration and layout, to printing and binding, distribution, selling and all the cool folks I've met. Zines are an awesome tool for introverts like myself.

In addition to our own everyday veneers, social media also obscures our authenticity. Other people's photos, clever memes and meaningful quotes frequently replace our ability to have innovative conversations about healing. We don't want to burden others with our pain or burden ourselves with shame. I like the accessibility and tangibility that zines provide for people looking to tell and reinterpret their own stories. As Black people, we are versed at extracting info from a discriminative world and applying it to our own lives. Some may call this conformity; I call it fortitude.

Naomi Moyer is a self taught, multidisciplinary visual artist and writer.  She often finds herself delving into the complexities of the African Diasporic experience.