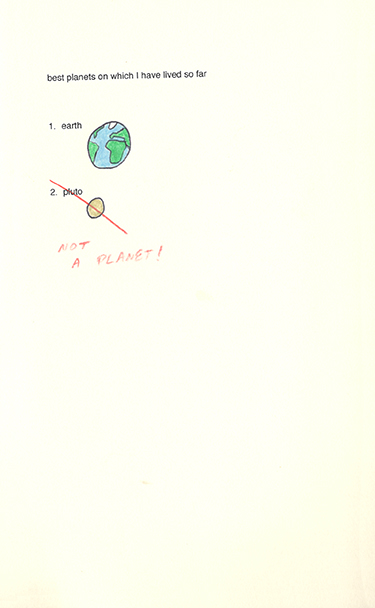 I’m not sure where to begin with Natural Order, a sparsely designed and confounding zine from Adam Zachary. In part, it’s an inventory of Zachary’s world, presented sequentially. You’ve got planets he’s lived on, mountains visited, waves seen and animals in his neighbourhood. Things get a bit geological in the zine’s latter half, looking at trees and the earth’s crust, amongst other things. One might label this avant-garde, but maybe it’s one person’s attempt to bring some sense to nothingness. After a few reads, Natural Order eventually leaves the impression that it’s quite literally about… a natural order. Versions of these “ingredients” can be found on Wikipedia and other parts of the internet. However, it is a small pleasure to have some random fella break out his vantage point in specific, certain terms. All that’s needed from the reader to step back and absorb them. Naturally. (Cam Gordon)